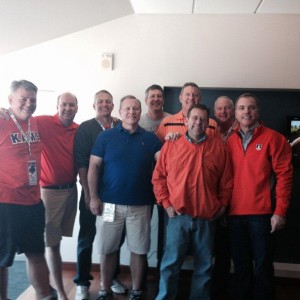 On Friday, October 24, the 84 & 84.5 Phrogues gathered in Champaign for our 30th Homecoming Reunion. We met at Stone Creek Golf Course in Urbana where we ate lunch (thanks for picking up the tab Dawg) and played 18 holes. Stone Creek is now the home course of the #1 ranked NCAA Men’s Golf Team, your Fighting Illini.

After hacking it around all afternoon, we met for dinner at Biaggi’s on South Neil in Champaign (thanks for picking up the tab DB) where we caught up on some old stories. Most of us then made the natural progression to Kam’s.

For those of you that have not been to Kam’s in a long time, I can assure you that the unique mixture of last week’s vomit and spilled beer odor slaps you in the face when you walk through the doors. T.J. confirmed that Kam’s hasn’t changed a bit. Just like in the old days, he said that when he took a lap, the girls gave him the same disgusting looks that he got 30 years ago.

On Saturday, we attended a very nice catered breakfast at the ATO house and house scholarship presentations. The house looked better than it looked the day we graduated. Although the current chapter members have had their share of problems, they are working through them with much guidance, especially from the Class of ’77. We were all very impressed with what we saw. Kudos to the Class of ‘77 for their generous support, both financial and time, of Gamma Zeta and its membership.

We then attended the pillow fight (football game). Thanks to Dawg and his family, we watched a rare Illini victory over Minnesota in the “Barry Family Luxury Suites”, named in honor of their family for their generous contributions to the U of I. This is not the Memorial Stadium that you knew when you were on campus.

I think that I can speak for those that made it back to Homecoming when I say that it was truly a great experience to catch up with each other and to attend the ceremonies at the house. Several have suggested that we should get together more often, so I am thinking of maybe having another event for the 84s and 84.5s in two years. For those of you that could not or chose not to make it, I encourage you to attend the next event. It has also been suggested that we invite all of the significant others next time.

Thanks to all that attended. I had a blast hearing you tell the same lies from 30 years ago. Hope to see the rest of you soon!