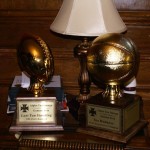 Each year starting in 2014, Gamma Zeta Alumni come together for an NCAA Basketball Tournament Bracket Challenge in the spring called “Tau Madness” and a “Last Tau Standing” NFL Football Pool in the fall.  The pot is split 50/50 between the entrants and the House Corporation or a charity and the winner’s names are inscribed on trophies displayed at the chapter house.

Here are the winners: