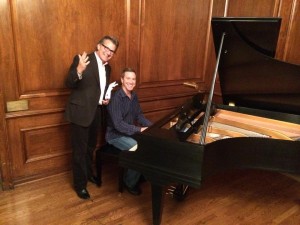 If you’ve been to the Chapter house over the last six months, you may have noticed that the grand piano was missing.  It was off at the Piano People in Champaign for a complete restoration.  It made its way back to the house for Homecoming and looks better than ever.  Considering this piano was originally built in Germany in 1902, purchased by Gamma Zeta in 1917, made it through two world wars and over 2,000 college guys it’s current “like new” appearance is amazing and the sound is great too!

Sam Gingher who is an ABD doctoral Piano Performance student, and Krannert Debut winner from last year played the piano at the Homecoming brunch and raved about it’s sound and feel.

Special thanks to Jack Klues ’77 whose considerable donation kicked off the renovation campaign!