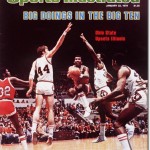 That’s what we got to hear about at the “Tau Madness” Kick-off luncheon yesterday at the Highline Bar in Chicago from Neil Bresnahan ’80 and Doug Altenberger ’87 who described first hand experiences going at it with two of the greatest basketball players of all time.  We also heard some great Lou Henson stories including the obligatory “Lou Doo” reference and many more.  Twenty-five Gamma Zeta’s attended the lunch.  You’re going to have to attend these luncheons in person to get all of the details but here are some of the highlights…

Craig Nadborne kicked off the meeting with some interesting trivia about how ATO Gamma Zeta has been intertwined with Illini basketball for over 75 years.  For example…

Gamma Zeta are 1st, 2nd and 3rd on the list of All Time Illini Basketball Career Free Throw Percentage Leaders

A full starting five of Gamma Zetas can be found in the Illinois State High School Basketball Hall of Fame.

Captain Bill Small ’63 led the Illini to the first two victories ever at the Assembly Hall clinching the Big Ten Championship in 1963. Jeff Ferguson was also on that team.

An award is presented to the Illini Basketball player who exhibits the most “Hustle” each year called the “MATTO” award in honor of Gamma Zeta Matt Heldman ’98.

Seven Gamma Zetas have served as Captain of the Illini basketball team.

Of all of the outstanding athletes who passed through 1101 W. Pennsylvania Ave. including multiple All Big Ten and All American’s in football, basketball, track, tennis, golf, swimming and gymnastics, Big Ten Medal of Honor winners and World Record holders, we’ve only had one Olympian – Jens Kujawa ’87 who played on the German National team in the Olympics. 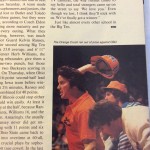 Peter Korst ’76, in partnership with Illini coach Lou Henson, was one of the founders of the Orange Krush back in 1975.  Peter coincidentally was one of the attendees at the luncheon.

Several Gamma Zetas including Dane Luhrsen ’77, John Aymond ’80, Mike Barrett ’80, Cary McMillan ’80, Jim Cavoto ’80, Dan Kennedy ’80 and possibly a few others (Craig Nadborne ’78 and Doug Altenberger ’87 as a high schooler were at the game but not on the cover) have a “Sports Illustrated Cover” (appearing in the crowd when the Illini vs. Ohio State game was featured on the cover on January 22, 1979.)  Bruce Barry ’80 appears inside the magazine in full Illini Krush gear.  Brez ’80 and Rob Judson ’80 provided the first row tickets.

Both Brez and Doug commented on the value that ATO had brought to their lives and that above all others, they stay in regular touch with their ATO friends.  Doug was drawn to Illinois in large part from watching Brez’s Illini teams.

Brez and Doug both pick Kentucky in the upcoming NCAA Tourney… though Brez said he’d take the “field” if offered.  Thanks guys for that incredible insight!!

Neither thought the Illini would make the field.

Here’s what Brez had to say about guarding Magic Johnson… “He was a freak!  Most point guards of that day were little guys… 6’0 to 6’2″ or so.  Magic Johnson came along and he was 6’8″ or 6’9″.  And, he had uncanny ball skills.  He could dribble around and in traffic and he would always have incredible control of the ball.  You just couldn’t take the ball from him.  He could position his body giving you a hip  and with his strength he kept you away from the ball yet because of his size, he could still see the court and make the pass.  His vision was incredible.  He was a freak!”

Here’s what Doug had to say about guarding Michael Jordan… “I was drafted by the Bulls and spent that summer working out with the other rookies and some other players.  I got myself in the best shape of my life, working out every day with weights and shooting and playing.  I was actually looking forward to the day that Michael would show up to practice so I could give him a shot.  I had played and done well against some of the best in college basketball and was a pretty good defender.  Finally, one day in August, he showed up to practice.  I matched up against him and first time down, he blew by me, trash talking all the way and slammed one down.  He was so much better than everyone else… than anyone who I had ever played.  It wasn’t even close.  It wasn’t just me.  The other players called him “Black Jesus”.  He could do things in practice and in drills that no one else could do.  He was the best!” 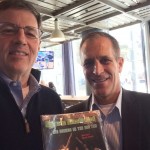 I completely blew it and forgot to take any pictures at the event so Craig Nadborne ’78 and I took a picture with the Gamma Zeta Sports Illustrated cover as we walked out of the Highline.  Somebody remind me next time or you’ll just get more of our ugly mugs!!

One more thing… be sure to enter the “Tau Madness” NCAA Tourney Bracket Challenge.  Here are the details – https://atoillinois.com/2nd-annual-2015-tau-madness-ncaa-basketball-pool/#!form/TauMadnessNCAABBallPool2015

Thanks to Brez and Doug for sharing their stories.  It was a lot of fun!!