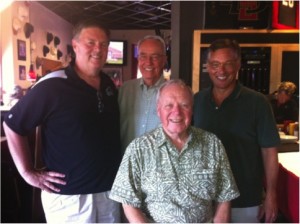 On Saturday, August 31, several San Diego area Gamma Zeta’s got together for lunch at Randy Jones Sports Bar in San Diego. The get together was prompted by Dane Luhrsen, Gamma Zeta’s Director of Alumni Relations visit to the area to watch his son’s Eastern Illinois Panther Football team play San Diego State (EIU won 40-19). Ed Ptacek ’54, Dr. Bill Mohlenbrock ’60, The Honorable Dick Murphy ’65, Brian Rawers ’78 joined Dane ’77 for lunch. This is just the tip of the ice berg of Gamma Zeta’s who have settled in San Diego and have lived in the area for years. Only Bill Mohlenbrock and Dick Murphy had known each other except for very recent ATO connections.

We learned that Gamma Zeta’s across four decades had much in common, both during our college years and into our careers. For example, we learned that Gamma Zeta’s in the 50’s, 60’s, 70’s and 80’s had all eliminated hazing during our times in the house. We all enjoyed various different methods of tormenting the Sigma Nu’s and we all had brothers who enjoyed their partying more than going to class but somehow pulled it together enough to make it through school and have successful careers.

We learned some great local historical facts of Gamma Zeta influence in San Diego and Chicago. In Chicago, we heard that Ed Ptacek was one of the original investors in Chances R which became a very popular bar/music club in Champaign in the 70’s but had it’s origins in the early 60’s in Chicago. Ed, a staunch Republican, had to convince the local Chicago Alderman that he was a Democrat in order to get the original zoning/liquor license and maintain the ruse for several years while he was involved in the business. In San Diego, we learned that the local trolley lines, named the Orange Line and the Blue line were named when Dick was on the City council. At the time, he was Chairman of the San Diego Transit committee and a good friend, also an Illini alumnus was the Director of the San Diego Transit authority. Yes, these two Illini alumni named the San Diego Trolley lines in honor of their Illini roots. The third line, the Green line is rumored to be named in honor of Dick (for his Irish heritage) but he conceded that was not true.

We shared stories for nearly three hours, mostly that aren’t fit for print but had a great time. Most notable however was that Brian Rawers, who has had a very successful legal career mentioned to Dick that he had been “this close” to being appointed California Judge two times in the last several years. Dick said that had he known that Brian was a Gamma Zeta, was otherwise qualified and had been ATO Worthy Master, that “we could have probably made that happen”. If that’s not a testament to the value of networking with your Gamma Zeta brothers, of all ages, I don’t know what is.