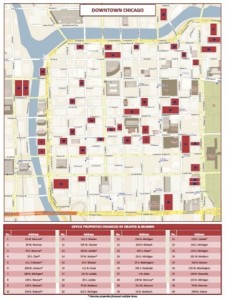 Eric Handley ’97 prompted the idea for a compilation of “Gamma Zeta impact on the Chicago Real Estate Scene” when he posted a link to an article about a project that he and his firm, William A. Randolph, Inc. built in Hyde Park called Harper Court (they built the hotel and LA Fitness). Bill Barry ’77 provided a graphic illustrating the buildings in the loop that he has financed as EVP of Draper and Kramer. I had visions of filling in that graphic with a blue and gold “Tau” on each of the buildings in Chicago that Gamma Zeta’s had touched as a developer, owner, contractor, engineer, lawyer on the deal, manager or some other influence. However, there was just too much. You could easily just paint the whole city gold and blue. Here is just a sampling of Chicagoland real estate activities impacted by Gamma Zetas. I’m sure this is just the tip of the iceberg!!

We’ve created a Linkedin “Subgroup” for Gamma Zeta Real Estate/Construction/Architecture and most of these guys are members. If you would like to join the group or need any kind of real estate related support this is the first place you should look – http://www.linkedin.com/groups/Real-Estate-Construction-Architecture-5175218/about