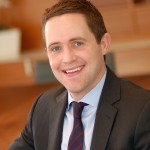 Why did you join Alpha Tau Omega?

In high school, I had an opportunity to visit the house and meet some of the guys, when I was visiting the campus. Right away, I knew they were a good group of guys. They seemed to be very well rounded, in the sense that they had their acts together academically and socially. They were involved in campus organizations and intramural athletics. They just seemed like a real well rounded group of guys. They made me feel accepted as a pledge, and it just seemed like an exciting opportunity. They were a well respected group of guys on campus. And everything turned out just like I thought.

What is your favorite memory of the fraternity?

I have lots of memories. The obvious one is just hanging around the house with the guys. And some of my fondest memories are from going on spring break together every year. Usually a group of 30 plus guys would go; each year, we went to a different place in Mexico. It was good to be out of Champaign, down south in the warm weather, relaxing and unwinding. It was not just a group from my class, but there were younger guys and older guys and we would all go together.

What kind of influence has the fraternity had on your life since graduation?

It has undoubtedly had an influence. Even though I am only a few years out, the network of people you have is unbelievable and that’s something you don’t realize when you are an undergraduate. You don’t realize how far-reaching the house is. In the Chicago business community alone, there are so many alumni here who are successful, well-respected guys who are great to know. The network of guys you get is phenomenal. I am also fortunate enough to have a large number of my pledge brothers who live nearby, so I am able to hang out with a big group of friends every weekend. That is something some people would take for granted. You just don’t realize until you get out that the benefits of the fraternity go well beyond your four years down there.

With whom do you stay in contact? Is there anyone you have lost touch with whom you would like to find?

My roommate now is Jeff Williams ’02; I’ve know him since before high school. I could give you a huge list! Matt Katsaros ’02, Tom Bruce ’02, Ryan Anthony ’02, Justin Ross ’02. Dave Mazurek ’02 is another good friend of mine, who is playing minor league ball and just left for spring training. There’s a whole bunch of us who get together on a regular basis. That’s just a short list.

Were there any other activities or organizations you were involved with during your college days?

I was on the hockey team and was a risk management monitor on the Inter-fraternity Council. I was also involved in the Study Abroad Program and lived in London for a little over two months. It was one of the better experiences of my life.

Did you have a nickname? How did you get it?

The nicknames I had were Vano or VZ.

Did you live in the house? If so, who were your roommates? Tell us about a memorable time with them.

Yes, I lived in the house for two years and then lived my senior year in what was called our senior house. That was with 17 other guys. It was called The Palace, but it is no longer. That’s probably a good thing because it draws guys away from the house. I did have roommates, Dante Ciccone ’02 and Joe Walsh ’02. There were plenty of memorable times but I don’t know how many I can divulge. When I lived with Joe, it was the second semester of our junior year and we just had a great time hanging out. Joe had an extensive movie and music collection, so he was a great guy to have as a roommate.

Can you tell us about your career?

I work in banking, specifically commercial real estate. I’ve been with LaSalle Bank since I graduated and it’s going well.