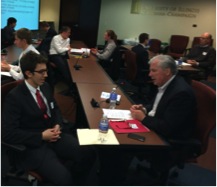 On Wednesday, January 15, ATO alumni sponsored a Mock Interview Day at the Illini Center in Chicago to give ATO undergrads an opportunity to practice their interviewing skills. Sixteen undergrads put on their best suits and ties, shined their shoes and each got an opportunity to meet and interview with two alumni. Each meeting consisted of a thirty minute interview followed by a fifteen minute feedback session.

All reported that they enjoyed the session, feel much more confident as they approach real interviews and would like to do it again. Some of the undergrad reported learnings include:

“I learned ways to translate resume credentials into talking points.”

“I learned how to restructure some of my phrasing in my answers to certain questions. I also learned more about the advertising industry and what the ideal person working in an agency is like.”

“I learned that body language is important.”

“ I learned that Philanthropy is always a plus – always talk about your involvement.”

Thanks to the following alumni who volunteered their time to serve as interviewers:

Congrats to the undergrads who participated? They did a great job.

Alumni also reported that they enjoyed the experience and plans are already in place to do this again next year.