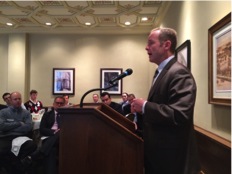 On February 28, 65 Gamma Zetas got a chance to hear first hand from Tom Tunney ’77 about his time at ATO, his business career as owner of Ann Sather Restaurants and his rise through the Chicago political ranks to Alderman of the prestigious 44th Ward of Chicago which includes Lakeview and Wrigleyville. Phillip Coover ’04 hosted the luncheon at the beautiful University Club in the Chicago loop.

Here are some of the highlights: 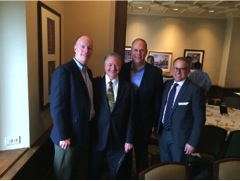 Herb Landon ’54 was a special guest of John Aymond ’80. Herb started attending Chicago ATO lunch gatherings back in the 50’s when John Reuttinger ’27 was still presiding. John was elected president of the Chicago ATO Alumni Association back in 1928 when our initiate #1 Thomas Arkle Clark was a regular visitor to their events. It was very cool to have that link to our past join us. Herb and John met regularly through at least the mid-80’s when somehow the tradition unfortunately faded away. John Aymond ’80 and Brian Rawers ’78 were regulars with Herb and John back in the 80’s. Brian Rawers sent an email hello and “thanks” from his home in San Diego to Herb because Herb gave Brian his first job in a law firm back in 1984. Herb pointed out that he had met first met Brian at one of these ATO networking lunches back in the early 80’s. Brian is now a Partner and lead litigator with the second largest law firm in California.

Alderman Tunney shared some interesting comments about Rahm Emanuel’s mayoral campaign, his negotiations with the Ricketts (Cubs) and the City of Chicago (Emanuel) regarding improvements to Wrigley Field, the economics of the City and his own political future. Tom also pointed out that he met Ann Sather through Craig Nadborne’s ’78 dad and credited his successful start in the restaurant business to his ATO connection. Thanks Tom for joining us!!!

Mark your calendars for the next ATO Chicago Networking lunch will be held Wednesday, April 2 at the Chicago Club. Cary McMillan, CEO of True Partners Consulting will be our featured guest. Don’t miss it!!