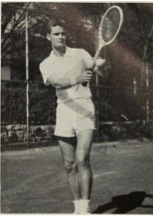 We’re very sorry to pass on the news that Stephen Hill ’55 passed away last November. Stephen was originally from Springfield, IL but in his later years, lived in LaGrange. He was part of a great group of guys who became Gamma Zetas from Springfield at that time including Carl and Bob Baker, Bob Phillips, Dick Kurz, Paul Hayes and Dick Walbaum.

He earned his undergraduate degree in commerce and law in 1955 from the University of Illinois and continued his studies in law, passing the Illinois Bar Exam in 1957. At U of I, he also played on the Men’s Varsity Tennis Team. In August 1955, he married the love of his life, Jane (Thiem) Hill. He began his career working for Arthur Andersen in Chicago. Over the next 25 years he held senior financial positions at Prudential Insurance, National Can Corporation, Marshall Fields (Macy’s) and CF Industries. Stephen enjoyed his work and near the end of his career he started his own Corporate Financial Advisory firm, specializing in Industrial Revenue Bond financing.