Last week on November 11, our country honored our servicemen on Veteran’s Day. This past Saturday, the Illini football team wore helmets honoring the ten Illini football players who died in the service with special helmets displaying ten stars, one for each of these men. One of those stars recognized Gamma Zeta Bruce Capel ’65 who was killed in action in Viet Nam.

Gamma Zeta has a proud tradition of service to our country.  During WWI and WWII, the house was closed down for a time due to so many of our brothers leaving for military duty.   Many more served during Viet Nam and though today.  Three Gamma Zetas that I’m aware of have risen to the very top ranks of our services – Major General Edward B. Giller 1940 – Air Force, Brigadier General Frank E. Blazey Jr. 1946 – Army and Rear Admiral William D. Masters, Jr. 1965 – Navy.  However, over time, I’d like to record and recognize all of our Veterans in some way so please send  me the information.

To all Gamma Zeta Veterans – THANK YOU FOR YOUR SERVICE!! 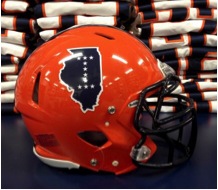