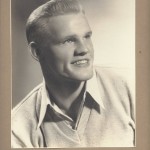 William B. “Bill” Erickson ’50 (June 8, 1928 – September 21, 1987) was an NCAA All-American basketball player at the University of Illinois during a career that spanned from 1947 to 1950, and then a player in the National Professional Basketball League for the Saint Paul Lights.

Erickson chose to play basketball at Illinois after high school. He played in every single game during his four-year career and was a starter for the final three. In his junior season of 1948–49, the Fighting Illini won the Big Ten Conference title and advanced to the NCAA Tournament. Illinois would defeat Yale to earn a berth in the Final Four (only eight teams played in the tournament back then), but would lose to eventual national champion Kentucky, 76–47. They would defeat Oregon State in the third place game, however. After the season, Erickson was named to the All-Big Ten team and was dubbed a consensus Second Team All-American.