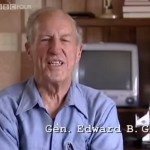 I’m constantly amazed at the interesting things that our alumni have done over the course of their careers. Retired Major General Ed Giller ’40 is up near the top of the list… from fighter pilot during WWII to a nuclear arms negotiator with the Soviets in the 70’s, he had some extraordinary experiences. I just came across this documentary titled “To Mars By A Bomb – The Secret History of Project Orion (Nuclear Propulsion)” where Ed is interviewed for his role as the Liaison Officer while assigned to the Air Force Special Weapons Center in Albuquerque, NM for Project Orion. Project Orion was a secret project funded by the Air Force during the late 50’s/early 60s which was a study of a spacecraft intended to be directly propelled by a series of explosions of atomic bombs behind the craft (nuclear pulse propulsion) that could take as many as 100 people to Mars. If you’re into this sort of thing, you may find this video interesting. Ed is interviewed about 3/4 of the way through.

Here’s a link to an article that we posted containing an original interview with General Giller ’40 a couple of years ago.