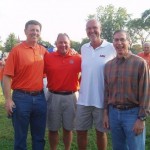 Richard V. Clausing Visitation for Richard V. Clausing of Ridgewood, N.J., will be from 12 noon until the time of the services at 2 p.m. Tuesday, Sept. 22, at the Glueckert Funeral Home, Ltd., 1520 N. Arlington Heights Road (four blocks south of Palatine Road), Arlington Heights. Interment will be in Randhill Park Cemetery. Born in Elgin, to Vernon and Lucille (nee Harz) Clausing, he passed away Thursday, Sept. 17, 2009, in White Pigeon, Mich. Richard was a graduate of the University of Illinois, Champaign. He worked for Arthur Andersen in Chicago. Later Richard worked as an executive of the May Corporation, where he became the CFO of Famous Barr. He then worked as the CFO of Lord & Taylor and later became the chairman. He also served as the CFO of Wickes Furniture. Richard is survived by his wife, Amy (nee Vogt); his children, Beth and John; his mother, Lucille Clausing; his sisters, Christine (Ernest) Owens and Marianne (Kevin Lee) Clausing-Lee; his nieces, Melissa, Kara, Ashlie and Rachel; and his nephew, R.J. He was preceded in death by his father, Vernon Clausing. If desired, memorial contributions may be made to the Richard V. Clausing Accounting Scholarship Fund and mailed to the Alpha Tau Omega Foundation, c/o Richard V. Clausing Accounting Scholarship Fund, 32 E. Washington St., Symphony Centre, Suite 1350, Indianapolis, IN 46204. Donations may also be made to the Ridgewood YMCA, 112 Oak St., Ridgewood NJ 07450 or the Ridgewood High School Scholarship Committee, P.O. Box 1338, Ridgewood, NJ 07451. For information and condolences, www.GlueckertFH.com or 847-253-0168. – See more at: http://www.legacy.com/obituaries/dailyherald/obituary.aspx?n=richard-v-clausing&pid=133272644#fbLoggedOut