John Aymond 1980 and I visited Rex Sherman in Pekin, Illinois this afternoon (April 6, 2013) to present him with a certificate of membership in the Diamond Circle “In affectionate appreciation of his seventy-five years of membership, services and devotion to Alpha Tau Omega Fraternity”. We had a great time and I know that Rex appreciated meeting us. He said that he was honored to receive the Diamond Circle Certificate from ATO. We took him to lunch at Applebee’s in Pekin. Rex said that it was the first time in two years that he had been out of his home. He really seemed to enjoy getting out for some fresh air, a change of scenery and a good cheeseburger.

Rex uses a wheelchair but can get in and out of the car on his own. He is still strong and didn’t want or need much help. We could tell he had been a good athlete…he still had that firm handshake. At the restaurant they asked for drink orders and I requested a diet coke. Rex said “I’m having a beer”. So, John and I joined Rex for a beer. We toasted to his 75 years of ATO and 92 full years of life. Strong grip, a preference for beer and I forget to mention, a little flirting with the waitress…after 75 years we’re happy to report that Rex is still a Gamma Zeta through and through.

Rex grew up in Pekin near Peoria. His father worked for the railroad but when his job was 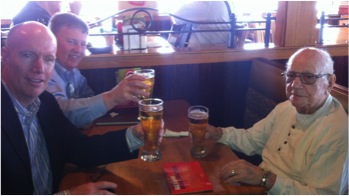 eliminated, he worked for Kroger’s and then opened his own restaurant in Pekin. Rex was a great high school basketball player and led Pekin to the final four in his senior year which they played in Huff Gym in Champaign. He said that they had some bad refs from Chicago or they would have won it all.

He went on to Illinois, to study physical education and joined ATO. John asked him why he joined ATO. He said “They came after me”. A funny ATO story he remembered was that one Friday night they served fish. The next morning, everyone in the house got sick. I asked him if it was the fish or the beer they drank after the fish. Rex said they didn’t drink beer in the house… it was definitely the fish. And… he hasn’t had any fish since that night seventy five years ago. It makes me wonder how many others from that group avoided fish for their whole lives after one bad batch from the Gamma Zeta kitchen. I know someone who hasn’t had any tequila for nearly 40 years but that’s another story…we all learn many lessons at ATO. Rex was on the Illini freshman basketball team and based upon some old Daily Illini articles, he did very well. He had a cup of coffee on the Varsity his sophomore year and played in four games but didn’t letter. The war took care of that. He did lead the ATOs to the fraternity intramural softball championship. John printed off some of those articles from the Daily Illini and showed them to Rex. Rex made sure that we left them and the ATO history that John had also printed off firmly saying that he wanted to read all 100 pages. The names of guys we mentioned sounded familiar but he didn’t remember many. He did remember Ed Giller. He mentioned Ralph Ehni as someone who was a good friend and had stayed in touch. Ralph was the quarterback of the football team and also had been Worthy Master. He remembered the piano being in the house but didn’t remember how or when it first came to Gamma Zeta. So that mystery is still out there. He didn’t remember calling pledges “Phrogues” so it seems that tradition started sometime after 1938. He didn’t remember a lot of other details about his ATO experience. Rex was only at ATO and the U of I for two years before being called into service so it’s really amazing that he remembers this much.

Before actually going into the service, he married a high school friend, Emilie. They were married for 67 years before she passed away in 2011. They never had any children but he has stayed close with nieces and nephews. One of his nieces lives in Pekin and visits him often.

Rex served for four years with the Army in the Pacific on a small supply island not far from Japan. He said they were never attacked but many guys passed through to recover who had seen combat. He was a clerk and worked with some memorable characters who were a lot of fun.

When he returned from the war, Rex found that his dad had passed away. The Army had not told him. So, he stayed in Pekin to help his mother with the restaurant for awhile. While in Pekin, he finished his undergraduate work at Bradley and later returned to the U of I for his Masters. He was not active with ATO this second time around but reminded us that he was quite a bit older and married by then.

Rex went on to a long career as a teacher, coach and ultimately Athletic Director at Wheaton Central in Wheaton, Illinois. I overlapped with him one year… his last and my first at Wheaton Central. There was a controversy that I barely remember at that time between Rex and the long time football coach at Wheaton, Howard Barnes. All I remember is that all of the sudden my sophomore year, Howard was no longer the football coach and Rex was no longer the athletic director. I didn’t push for more details. Rex enjoyed hearing about Steve Kimbell ‘66, Ken Schreiner ’66, John Wright ‘68, John Stacey ’69, Mike Perkins ’74 and Mike Maher ‘77 who are guys he coached/taught in Wheaton that went on to become Gamma Zetas.

Rex retired from Wheaton down in Vero Beach Florida. He said that he was an avid golfer and played with a group of 12 guys nearly every day. He said that they had a reciprocal agreement with several other courses in the area and his group rotated with other similar groups around those other courses and really had a lot of fun. He got down to a 5 handicap and had four hole-in-ones during 33 years in Vero Beach.

The aids at the nursing home joked that they called Rex “Ornery” Sherman. At lunch, we asked Rex his nickname and he replied, “Sexy Rexy”. He didn’t fess up to “Ornery”. He still follows sports on TV regularly and was up on the NCAA basketball tournament (basketball is his favorite sport) and golf. He was well aware of former Illini golfer from Pekin, D.A. Points and his recent success on the tour. In fact, he said that D.A. had taught his nephew some golf lessons. Coincidentally, our waitress at the restaurant was a neighbor of D.A.’s… Pekin is small, friendly town. He seems to be getting along pretty well. The home was clean and the staff friendly but I know that he enjoyed this break from his normal routine. Rex certainly enjoyed the beer at Applebee’s. In good ATO tradition, we offered to sneak a six pack into his room but he said that he wouldn’t have any place to keep it cold and the “Thirsty Thursdays” they have in the home would have to do. I know that any Gamma Zetas passing through would also enjoy tipping one with Rex and that he would appreciate seeing you.

Before we left, Rex showed us a letter that he received from his nephew about his nephew’s grandson, Ryan Neidermair. Ryan was a great student and football player in high school and received interest and letters from Ivy League schools. However, he chose to attend Rhodes College in Memphis where he’s playing football and he’s joined ATO (Bob Simonds reports that Rhodes is our “venerable Tennessee Alpha Tau chapter, established in 1881”). Rex liked the coincidence because Ryan had no idea that Rex had been an ATO. The link seemed more meaningful to him now.

We helped Rex hang his ATO Diamond Circle Certificate which is now proudly displayed next to his four hole-in-one awards and family pictures.