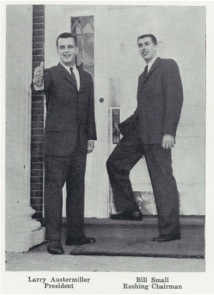 Gamma Zeta Bill Small ’63 and his sons, Mike ‘88 and Andy ’92, also Gamma Zetas, have won 9 Big Ten Championship Rings between them. With Mike still going strong as the Head Illini Golf Coach coming off his 5th Big Ten Championship in a row this summer (2013), Bill predicts the Small’s will pass by Phil Jackson’s total of 11 Championship rings before it’s all over. Here’s catching up with Bill Small.

Where did you grow up and can you tell us a little bit about your parents and family?

I was born in Peoria on 9/3/1941.  I grew up in Roanoke, 25 miles east of Peoria on Rt.116.  My father worked at Caterpillar 41 years and my mother was a homemaker.  I had one sister who was 4 years younger who graduated from ISU and has lived in California since 1970.

During high school, you transferred to Aurora West.  Aurora was traditionally a hotbed for high school basketball.  Was basketball behind the transfer?

No, my father received a promotion to be the Safety Manager at a new plant in Aurora and we moved to the west side of Aurora in August of 1958.  Coincidentally, we purchased a home across the street from West High.

Was East Aurora your big rivalry at the time?  What were your games against them like?

Yes. Our games with east were “Wars”.  We were 5-0 against them in my 2 years and I believe had I had 30 plus against them 4 times. (Editor’s note: The East Aurora vs. West Aurora rivalry is the second oldest and one of the fiercest in Illinois. They have now played for over 100 years and over 200 games)

You made a couple of trips “downstate” during your Junior and Senior years.  Were those matches played in Huff Gym?  What were some of your best memories of playing at Huff as a high schooler?

Yes. We played 6 games in Huff – placed 4th and 2nd in those 2 years.  We lost to Springfield my senior  year after having ran the table – we won decisively against teams supposedly better than us- Thornton , Rantoul and Galesburg.  We were better than Springfield but you know basketball.  That was the only game I ever fouled out!! The crowds were electric and Huff was unbelievably loud/noisy.

What was recruiting like for you?  Why did you pick Illinois?

State school, familiarity with the program. The fan and state support were factors.  I could have gone most anyplace else – many other options.

When did you start considering joining a fraternity and what did you choose ATO?

What was pledging like for you.  As an athlete, did you do a different pledge program than the others?  How long did you live in the house?

No. I lived in house all 4 years and really enjoyed it.

Who were some of the most memorable guys in the fraternity at the time and why?

Pledge brothers – 10 of us will get together at homecoming this fall for our 50th reunion(class of 63). My pledge father was Pete Fernandes.  I had good friends and brothers in all the classes.

What were some of your favorite memories from your time at ATO?

You must have been pretty busy with basketball and school but did you ever serve in an office or on any committees?

Yes, several and the most enjoyable was  Rush Chairman – I still have our booklet from when Larry Austermiller was President and I was Rush Chair.

Do you remember any particular challenges that faced the chapter during your time there and how did you guys deal with them?

Our GPA was not good but in everything else we were the best on campus!! 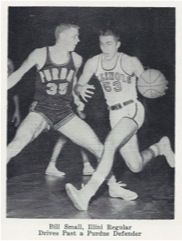 You had a very successful Illini basketball career and a Big Ten Championship your Senior year.  What were some of your favorite memories from basketball and most memorable team mates?

Winning the Holiday Festival  in Madison Square Garden, games in the old Chicago Stadium and opening the Assembly Hall.

What was it like playing #1 Cincinnati in Chicago in front of 23,000 people?  You guys just had one loss at the time.  Was it a circus?  Where was the game played?  The old Stadium?

Yes. It was wild and loud. They were #1 and we were #2 at the time. They got a lead early in 2nd half and then held the ball, similar to 4 corner offense .  They didn’t want to run with us and get into a shooting match.

Your senior year was the last year that the team played in Huff.  The coaches and you guys must have been worried about losing your home court advantage going into those last two “must win” games against Northwestern and Iowa but it looks like you had great crowds.  What was it like going from Huff to opening the brand new Assembly Hall?

Assembly Hall was supposed to be done in time for our sophomore year but labor strikes and steel shortages delayed it.  We had just 1 practice in the Assembly Hall before that first game so it was like a neutral court. (Editor’s Note: Bill led the team to victories over Northwestern and Iowa in those first two games ever at the Assembly Hall sealing the Illini’s Big Ten Championship)

How did the rest of the NCAA tourney go?

We beat Bowling Green who had Thurmond and Komives both AA then got beat by Loyola who beat Cincy in finals.

I won it twice and I believe one or two bad games cost me the % for the 3rd.

You were drafted by the Detroit Pistons in the 5th round.  Did you give it a shot?  What was professional basketball like at the time?

No.  I got married and played with the Akron Goodyears in the NIBL league.  We won the National AAU tourney and represented the AAU in the Olympic Trials.

Tell us a little bit about your career and family after basketball.  I know of Andy and Mike… did you have other children?  Where did you raise them?

Andy (baseball) and Mike (golf) had very successful college sports careers.  Did you know early on that they would be that good?

They were good athletes from get go. They played all sports and both were very good in basketball also.  Andy could have played Div 1 if he hadn’t had serious knee injury so he stuck with baseball. Mike started golf at age 12 and played basketball thru high school.

How did you all end up choosing different sports?

It was their choice.  I didn’t push but just supported and helped.

What was recruiting like for them?  Did they even seriously consider attending other schools?

Not really.   U of I was so close and we were over here all the time for the games.  Andy’s knee injury prevented him from being heavily recruited.

Were you able to get to see the boys play a lot while they were in college?  What are some of your favorite memories from their college careers?

Baseball yes.  Golf not so much. I did see all the championship games and matches.

Both Mike and Andy were also ATOs.  What was it like for you to see them make that choice as well?

Proud. They both developed life time friends in their 4 years at ATO.  They both lived in the house all 4 years and really enjoyed it.

Was it more exciting for you to play or to watch your boys play in college?  And now, you can watch Mike coach.  Can you relax and enjoy it or do you take every swing with every player?

Been there and done that so I conceal my emotions pretty well but I do get fired up  — I still like competition  and the ability to compete.

Your boys were not only successful players but also leaders and captains of their respective teams.  What suggestions do you have for other parents to ensure that they give their kids the best possible sports experience and that they enjoy it as well?

Encourage and support but don’t push. Remember it is their game, not yours, so be professional about the experience.

You mentioned that you had a “ring” for your Big Ten Basketball Championship in 1963, Mike got one for golf in 88 and Andy got two in baseball in 89 and 90.  Mike now has 5 (I believe??) as a coach so your family total is nine rings.  Let us know if any are missing from this list.  Phil Jackson just wrote a book titled “11 Rings”.  Are the Smalls going to pass Phil by?

What keeps you busy now?  Do you play golf with the boys?  Do you stay in touch with any of your ATO buddies?

We head to Florida in winter. I play as much as possible but they have families and that is their priority now. I do play with Mike’s youngest. Last summer Mike, Andy and I played Olympia Fields and Medinah. It was awesome!!