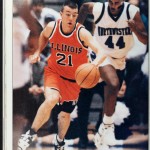 October 12, 1999|By Gary Reinmuth, Tribune Staff Writer.
CHAMPAIGN — Inseparable in life, they remained inseparable in death. Basketball or life, it was hard to tell which they loved more. The son had this passion and the father provided the pride.

His teammates on the University of Illinois’ 1997-98 Big Ten co-champion basketball team had a nickname for Matt Heldman.

They called him “Otis.”

Matt loved the name because Otis was also the first name of his grandfather and of his biggest fan and best friend–his dad. Matt had “Otis” tattooed on his arm.

“Otis” was also a great name because it fit Matt Heldman to a T. Otis isn’t a name like Reginald or Hubert. It’s a solid, blue-collar name that says “I may not be pretty but I’m proud; I may not be gifted but I’ll outwork you until you drop.”

Matt Heldman, 23, and his father were killed Sunday night when a 1986 Chevrolet Corvette driven by Heldman’s father collided with a mini-van in Libertyville. The two occupants of the mini-van were also killed. Police said none of the victims were wearing seat belts.

Before he graduated and went on to play professionally in Greece and Finland last year, Heldman was a 6-foot, 167-pound point guard who did the Illini’s heavy lifting; who had a jump shot so flat and ugly it made you cringe, but whose gumption and desire provided the inspiration that carried the Illini to a share of their first Big Ten crown since 1984.

“I may never have had a player who played as close to his potential as Matt did,” Illinois coach Lon Kruger said. “He laid it out there every day in practice. Matt always took great satisfaction in preparing and beating people who were more talented. What I’ll always remember is the passion he played with.”

Pride. When it came to Matt, Otis Heldman, a 53-year-old life-insurance salesman and former small-college basketball player, had so much of it he couldn’t hold it in.

“Otis was unyielding in his loyalty to Matt,” said Kruger. “He was just so proud of his son.”

Bad news travels fast in these parts and in the case of Matt and Otis Heldman, Monday morning was double tragic for Illinois’ extended basketball family. They remember the son who played basketball so hard it made you ache and the supportive, doting father who missed only two of the 117 Illini games in which Matt played.

The news also hit hard in Libertyville, the Heldmans’ hometown.

“There’s like a big hole in my chest right now,” said Max Sanders, who coached Heldman at Libertyville High School. “I was going to the airport last night to pick up my son and the street (Milwaukee Avenue) was closed by the railroad track. I couldn’t see what had happened but there were a lot of flares out so I guess there were investigating the accident.

“I’ve known him since grade school. When he started coming to my basketball camp he was a little skinny kid and he just kept working harder and harder and harder. He was one of those success stories you like to see.”

Illinois senior center Victor Chukwudebe first heard about it from reporters when he showed up at the Ubben Basketball Complex to work out Monday afternoon. A stunned Chukwudebe declined to talk.

“I’m having a hard time right now,” Bradford said. “He was one of the people who really helped me out when I was a freshman (and partial qualifier). I think the thing I remember most about him was his character. He was a guy who had a lot of spirit. He’d just look at you as if to say, “Hey, it’s time to get going.’ ”

“I haven’t had anybody who ever worked harder,” Sanders said. “Some stars, you get baggage with but not Matt. I coached him for three years and not once did he ever answer back. It was always `OK, coach.’ If you’re from Libertyville almost every time you drove down his street you would see him and his buddies playing in the driveway. It went on all hours of the day.”

For Heldman, all the practice finally paid off. In his senior year, Illinois was picked to finish seventh in the Big Ten. The star–Kiwane Garris–was gone and the Illini desperately needed a point guard to replace him.

When Bradford was declared ineligible and former Brigham Young star Robbie Reid chose Michigan over Illinois, Heldman won the job by default. Heldman had played the point for Sanders, but the critics said Heldman wasn’t a good enough penetrator, passer or floor leader to play at the major-college level. Heldman proved them all wrong.

After averaging 10.1 points and dishing out 66 assists as a junior, he contributed 10.9 points and a team-leading 131 assists as a senior. While leading the Illini into the second round of the NCAA tournament, Heldman hit double figures 20 times. He was also a model of stamina, averaging 36.5 minutes per game and starting all 33 games. His 1,203 minutes is only 12 shy of Eddie Johnson’s school record.

The Heldmans’ Corvette was southbound on Milwaukee Avenue in Libertyville when it collided with a Chrysler mini-van at 7:27 p.m. Also killed were two occupants of the mini-van: Francis Osterman, 69, and his wife, JoAnn, 61, both of Libertyville. Matt Heldman is survived by his mother, Linda, and sister, Amy.