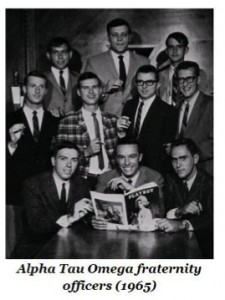 Dick Murphy was Gamma Zeta Worthy Master in 1964/65 and then went on to an incredible career that included business school at Harvard, law School at Stanford, a stint as an aid in the White House … while also working in the Pentagon War Room, time as a banker, a lawyer, a California judge and finally Mayor of the 7th largest city in the United States, San Diego. The following is an excerpt (reprinted with permission from Dick) from his biography, “San Diego’s Judge Mayor: How Murphy’s Law Blindsided Leadership With 2020 Vision” which provides an interesting insight into his time at ATO at the University of Illinois.

Fraternities were very big at the University of Illinois, sometimes then referred to as the “frat capital of the world.” Wanting to be cool, I pledged Alpha Tau Omega (ATO) during my freshman year because it was one of the most prominent of the 57 fraternity chapters at Champaign-Urbana. It was also akin to “Animal House,” filled with varsity athletes and accomplished hell-raisers. Still thinking of myself as a jock (though not good enough to play at the Big Ten level), I lived at the house for four years with college athletes as roommates and some other pretty rowdy guys as fraternity brothers.

The ATO house was a wild and crazy place. Most of the fellows were into playing sports, drinking beer, and chasing women. I was a little more grounded than many of my housemates. But while enjoying much of the frivolity, I also learned from some of my frat brothers. For instance, Don Snodgrass, the chapter president and two years ahead of me, became yet another valuable mentor when he kind of took me on as a project. He counseled me to change my hair—get rid of the flattop, he urged—and pay more attention to how I dressed, and generally, to shape up and improve my image. It must have worked—I was eventually elected president of the fraternity chapter as well as to a seat on the Inter-Fraternity Council.

Social life was a major focus. I dated a fair amount, and in fact, was put on an annual list of “The 10 Most Eligible Bachelors on Campus” that ran on the front page of the school newspaper. Though I was proud of the honor at the time, it really meant that I didn’t have a girlfriend.

Fun was found mostly in the frat parties and listening to the great rock ‘n’ roll and folk-rock of the time. In fact, that’s still an interest of mine that, I think, surprises friends when they learn I’ve attended concerts by groups such as 10,000 Maniacs, the Eagles, and Counting Crows. (A slight digression: In middle age, when I was running for mayor, San Diego working public radio station KPBS asked me and my opponent Ron Roberts to name our favorite songs of all time. I had no trouble reeling off one for each decade: Buddy Holly’s “Peggy Sue” (1950s), Bob Dylan’s and Peter, Paul and Mary’s “Blowing in the Wind (1960s), the Eagles’ “Peaceful, Easy Feeling” (1970s), Bruce Springsteen’s “My Hometown” (1980s), and the Counting Crows’ “A Long December” (1990s). After the election, one woman told me she’d voted for me solely on the basis of the music I’d listed in that interview.)

The fraternity wasn’t all about hijinks, though. In fact, some of my most intense learning experiences sprang from my role as a chapter leader. I learned to run the organization and mediate disputes among its 100 members by, for example, working to quell clashes between members who wanted to party all the time and those who needed a quieter environment for studying.

A particularly defining experience came as part of my frat role, though it happened far from campus. Near the end of my junior year, the fraternity members elected me president (aka “Worthy Master”) for my senior year. One of my best friends, Bob (“Bates”) Linn, was elected treasurer. As 21-year-olds, we’d been entrusted with the future of our fraternity chapter.

At the end of the school year, the national fraternity organization notified our local chapter that we were going to be placed on probation for a year due to our members’ poor grades. Not only did that mean no social events for a house of party animals, it meant a major embarrassment that threatened to affect the chapter’s image on campus and its ability to attract new members.

Our only hope was an appeal at the national fraternity convention that summer. It was no ordinary convention, however. It was the start of the 100-year anniversary celebration of the founding of Alpha Tau Omega. The national convention was to be held in the Bahamas.

Further underscoring this convention’s historic role was the fact that the agenda contained a controversial resolution to repeal the national fraternity’s century-old policy of limiting fraternity membership to white male Christians. For a fraternity founded in the South at the end of the Civil War, this would be a big step. Needless to say, our local chapter’s issue was not very high on the agenda.

Just attending the convention proved logistically challenging for Bates and me during that summer of 1964. We drove an old car from Chicago to Miami. Just as we were about to board a boat for the Bahamas, a major hurricane struck. Our departure was delayed, and we had to spend the night in a Miami Beach hotel. Hundred-mile-an-hour winds soon blew out the hotel’s upper-story windows, scattering shards of glass in all directions. The guests were all herded into the hotel lobby bar for an all-night vigil (which included unlimited free drinks).

When the eye of the storm passed over us, Bates decided he wanted to go for a swim in the ocean. Bad idea, I thought. But, then, I’d had a lot less to drink than he had. So I kept an eye on him as he achieved his dubious objective of swimming in the Atlantic during a hurricane.

Eventually arriving in the Bahamas for the national convention, we still faced a daunting challenge: A pair of 21-year-olds seeking to persuade the fraternity’s national leadership to rescind our chapter’s academic probation. Remembering my high school speech teacher’s admonition, we knew that just telling them how deserving our chapter was would not carry the day. We needed to figure out how making an exception for our chapter would benefit the leaders of the national fraternity.

I was a bit apprehensive. This was a big challenge. But I’ve never minded making a speech if I have something worthwhile to say. And in this case, we had an argument of consequence. By then, my former speech teacher’s advice about gearing your remarks toward the audience, instead of yourself, was automatic. So we passionately made the case about the Illinois chapter being a showcase for the national organization.

Miraculously, the national fraternity granted our appeal. The academic probation was rescinded. We were given another year to improve the local fraternity chapter’s grade-point average, which we accomplished by assembling an especially smart pledge class. The lesson learned was that you can get people to do what you want if you can convince them that it meets their needs. And once again, I felt the hand of God had shown me the way.

By the way, the ATO national convention also did vote to repeal its policy limiting fraternity membership to white Christians. I was proud to cast the vote on behalf of the Illinois chapter in favor of the repeal. And in the fall of 1964, our chapter pledged its first Jewish member.

Editor’s Note – as usual, there’s always a “rest of the story”… Here’s at least part. In the spring of 2013, I was at a meeting for the Wheaton High School Alumni Association and I started talking to one of the other Board Members, John Stacey. It wasn’t too long before we realized that we were both ATO’s though I had graduated in 1977 and John a few years earlier in 1969. John told me the following story…

“I would not be the man I am today if Gamma Zeta Worthy Master Steve Kimball 1966 had not called me to his room to berate me and express his disappointment in my mid-term grades. I had just about given up and was prepared to return to Wheaton and attend Aurora College. I felt so bad that I had personally disappointed Steve who was from Wheaton and had vouched for my pledging. I told him I was sorry and I would do better. I raised my GPA by 1.6 in the next 6 weeks and never had trouble after that. If Steve hadn’t cared enough, I don’t think I would have made it. Today I place a high value on the contact that I enjoy with many of my brothers (Bill Carey, Ron Bess, John Mulliken, John Wright, Denny Mool and more).”

After reading Dick’s story and hearing John’s, I put things together and realized that Steve Kimball, the Gamma Zeta Worthy Master that John mentions, who was so influential in his life, was Dick Murphy’s successor to that role. Undoubtedly, Steve took over having to live with the commitment that Dick had made at the ATO Congress in the Bahamas that Gamma Zeta had to get their act together with regard to their grades. And… John was a threat to that commitment with his early low grades. So, Steve got John straightened out and John had a successful college and professional career after that… 40 years as a teacher and coach in the Wheaton, IL public schools. Bottom line… Wheaton got a beloved coach and teacher because the ATO’s wanted to be able to party and Dick made that trip down to the Bahamas to make sure they could!