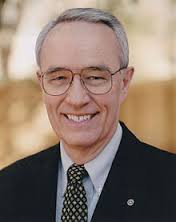 Dick Murphy ’65 served as Worthy Master at Gamma Zeta. Since those days he had a fascinating and varied career: from a Pentagon official in the White House to a California Superior Court Judge to Mayor of San Diego. His book, “San Diego’s Judge Mayor”(available at Amazon.com) chronicles his life journey and lessons learned, including his ATO Illinois experience.

What was the impact of your leadership as Worthy Master on the chapter?
In my opinion, the most significant contribution that I made was to bring unity to disparate factions among the brothers.

The chapter had undergone a shift in emphasis. When I first joined, one group of wild hell raisers, while fun to be around, didn’t take school seriously enough. The house faced impending academic probation by national.
We shifted our emphasis in pledging to get people equally cool, yet better students. We ended up with a group of very popular young men who took study more seriously. There was conflict between the more studious and the party animals. I had to be a mediator to resolve their differences and keep the peace. I liked being a student, but liked having a good time, too. We worked out a compromise. Everyone was reasonably happy with it. This was a skill I would later find helpful as a judge mediating disputes.

Meanwhile, we needed to convince national that things were changing at Gamma Zeta. We had a pledge class of high academic achievers. We needed to talk national out of academic probation. Academic probation means no social events at the house. The convention that year was in the Bahamas and it was a big one – the 100th anniversary of the fraternity. It fell on me and other brothers to convince them that it was in national’s interest not to issue academic probation on our chapter. That would be an embarrassment since the ATO chapter in the same city as the national headquarters would be on academic probation for the national fraternity’s 100th anniversary. They agreed. Needless to say, we fulfilled our plan that brought our GPA above the university average.

I learned an important lesson that when trying to convince people to do the right thing, that it is in their best interest. I have a chapter about that experience in my book.

You have led a very diverse career since your ATO days, from being a Pentagon military aide, to serving as a Superior Court Judge to being the Mayor of San Diego. What do you believe has been key to taking on new challenges each step of the way?
After earning a dual degree in Economics and history at the University of Illinois, I earned an MBA at Harvard Business School on an officer commission. Then I fulfilled that commission by serving in active duty at Fort Benjamin Harrison in Indiana, as a Second Lieutenant in the Army.

Eventually, I ended up at the Pentagon War Room, helping to develop their computer system, thanks to the skills I learned working summers at IBM while an undergrad. While at the Pentagon, a friend tipped me about getting an additional assignment to work at the White House, as a military social aide. I called, they interviewed me and since I was single and had a top-secret clearance I got the job. It was during the last year of Johnson’s administration and Nixon’s first. The work involved running military receptions and state dinners at the White House.

That was a fabulous experience. I interacted with people at the very highest levels of American society: The President, the First Lady, Supreme Court justices, congressional leaders, presidents of corporations. I was a functionary, facilitating events that take place, the one who introduced leaders in the receiving line to the President. I would escort single ladies to these events, people like Peggy Fleming, even President Nixon’s daughter, Tricia.

There I was — a guy who grew up in the blue collar, middle class suburbs of Chicago — in the middle of all these high powered people. It was quite an eye-opening experience; I saw a whole new world. What I discovered was that these people that were running America were not all that extraordinary. They really were ordinary people. What made the difference was that they were focused, worked hard, and maybe were a little bit lucky. They persevered. They knew what they wanted, worked hard at it and got positions of significant influence, not so much by talent, but hard work.
Another thing I noticed was that many of those people of influence were lawyers. That was the way it was back them. I decided to law school, and if an opportunity arose to get into politics, I should go for it. Anybody can get into politics if they work hard. I went on to law school at Stanford University. Later, I pursued a position on San Diego city council.

In your tenure as Mayor of San Diego, you faced some very serious setbacks. Share what you learned through those experiences.
No matter how good your intentions are, you cannot always control your destiny.

The first couple of years as mayor were really positive. I set ten goals for the city, and then went about the work of achieving those goals. We built a new baseball stadium and whole bunch of other positive projects involving libraries, airports and freeways. It really was a great start. Then there were pre-existing infrastructure issues, like hundreds of sewer spills. We cut them by two-thirds. So, it really was a roaring start over the first couple of years.

But these positive achievements were overshadowed by a rising pension deficit. It was a problem before I took office and worsened because of the economic crash in the early 2000’s. Pension deficits have become a serious problem across the United States. Too often, government officials are in denial about the problem and pretend that the problem does not exist. We took a completely different tack, being forthright and conducting public hearings about the problem. Unfortunately, it became a big controversy, making it very difficult to operate and continue achieving positive things. There was so much opposition from the press, who were consumed with the problem and paid little attention to anything else. Our hands were tied. It became impossible to do more, as it seemed the public was focused on the looming pension crisis.

Even though I (narrowly) won re-election, I became increasingly aware that continuing in office was distracting the city from moving forward and solving its problems. Too much attention was on me, “the mayor with the pension deficit”. I concluded that we needed a mayor who could work on the problems, instead of having to deflect blame. My great concern was what was best for San Diego, not what was best for me. That was why I stepped down from the position.

So how has life been since then?
Good! It’s interesting that when people have a longer perspective, they can see things better. People have told me that they now see that I was not the problem. The fiscal crisis that hit San Diego was really a first wave of a national fiscal tsunami. Within two years after my departure from office, there were pension crises everywhere. Most pension investments were in stocks and bonds. When the economic crisis hit, everyone was hit.

I’m still referred to as “Mayor”. People are friendly toward me and I get invited to all kinds of things. This week I spoke to a class at a university. I’m the vice chair for a 6000-acre park I helped to create as a city council member, on the board of several nonprofits, a member of the San Diego rotary and attend social functions.

There are some business investments I work on, properties I own.

Since I was a judge for 16 years, I had a judge’s pension and could walk away from the mayor’s office and still have an income.

Times are certainly changing, some would even say tumultuously. What have you learned about balancing adaptability, on the one hand, and maintaining principles on the other?
Certain core principles in your life should never change – for example, honesty and fairness. However, the willingness to be open to new ideas allows you to adapt to changing circumstances.

People need to understand that for every success in life, there is a failure. You never know which will happen. It’s better to try and fail, then to have never tried. The big regret people have at the end of their lives are the things they didn’t do, that they could have done. They never tried to do something.

I think Teddy Roosevelt said it so well:

It is not the critic who counts; not the man who points out how the strong man stumbles, or where the doer of deeds could have done them better. The credit belongs to the man who is actually in the arena, whose face is marred by dust and sweat and blood; who strives valiantly; who errs, who comes short again and again, because there is no effort without error and shortcoming; but who does actually strive to do the deeds; who knows great enthusiasms, the great devotions; who spends himself in a worthy cause; who at the best knows in the end the triumph of high achievement, and who at the worst, if he fails, at least fails while daring greatly, so that his place shall never be with those cold and timid souls who neither know victory nor defeat. [The Man in the Arena]