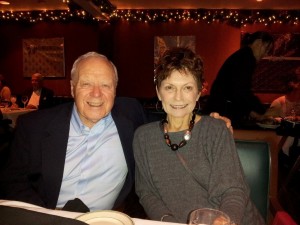 Ed spent many years in the Information Technology industry. His work involved marketing/sales, as well as executive management and consulting. He lives in Solana Beach, CA with his wife Claudette. He has a son in Seattle, and a daughter nearby in Southern California, along with three grandsons ages 5, 11, and 23.

What were some of the best times at Gamma Zeta in the 1950’s?
I especially remember the Gamma Zeta Homecoming Decorations, the Spring Carnivals, which we staged with different Sororities, and many IM Sports. You played whatever contests you could. Some of us would even play water polo, ping pong or horseshoes — anything for those points! Of course, I have to mention the fellowship we enjoyed at Bidwell’s (no longer around) and Kam’s. There was no drinking in the House in those days , which led to our fair share of 35 cent quarts at these upscale establishments.

Attending ATO Congresses were also great times. I remember driving to Swampscott, MA and Atlanta, GA for two of these events. We were always proud to represent Gamma Zeta and returned home dedicated to keeping our Chapter on top. More Brothers were able to enjoy the Province conclaves, usually held in Indianapolis. It was fun to enjoy ourselves “off campus”.

What was the impact of your leadership as Worthy Master on the chapter?
Being Worthy Master does wonders for one’s confidence to lead after you leave school. You learn to organize and carefully staff with the right co-leaders. I cite the extraordinary class of ’57, which is comprised of many successful individuals. This group is very cohesive and continues to meet regularly. They demonstrate the values of ATO. I credit making Waldo Peterson the Pledgemaster as a big reason for this class’ development and success. When most seniors want to “ease off”, Waldo accepted his first position of Leadership at Gamma Zeta and didn’t stop there. After graduation, Waldo went on the be a Chapter Advisor, Province Chief and House Corporation President. I always felt that Rushing Chairman and Pledgemaster were the two critically important posts in the House. The Chapter moves ahead based on the job done by these Brothers. I never forgot this lesson.

What was the impact on your own life, serving as Worthy Master?
While I was Worthy Master, a few older actives (all good friends of mine) decided that they didn’t think all House rules should apply to them. I led the other House Officers in holding firm and so, by mutual agreement, some older actives moved out of the House. This hurt financially, but the rest of the House rallied together and a trend did not develop. The House continued to be strong. I learned that leadership and friendship must be dealt with separately. A leader must learn how to maintain his friendships while leading. Sometime it is difficult, but the experience at Gamma Zeta has helped me throughout my life. By the way, one Brother who moved out included me in his wedding party and has remained one of my closest Gamma Zeta Brothers.

You have been helping the chapter quite a bit by sharing stories, pictures and other memorable items from your era. Why is this is so important to you?
I have shared some stories, pictures and other memorable items from the ’50’s for three reasons: First, Gamma Zeta still resides in the same house, with the same type of Brothers and Pledges for over 80 years, enjoying the same type of fellowship. Second, although we’re told that times have changed in the 60+ years since we in the ’50’s lived at Gamma Zeta, have they really changed? Some of the pictures and items I have sent tend to show that many things are the same, at least the basics. Third, I have kept a few items from 1950-54 because it was one of the best periods of my life.

What impact has ATO had on your life?
I have always believed that the impact of my ATO Gamma Zeta involvement was just as important as my double B.S. degree from the Commerce School at the University of Illinois. An example of the impact of this is that once, while performing Executive Search work for a large Corporation, I was asked why this work was “second nature” to me and I think I answered something to do with past experience. I should have answered that I had the opportunity to be Gamma Zeta Rushing Chairman, where the organizational skills, marketing and sales skills learned have benefited me throughout my life.

Who was an ATO who made a positive impact on you during your undergraduate years? What kind of impact did he make?
Probably Tubby Bacon ’52 made the most impact when I was completing my Freshman year. In early 1951, we were less than 6 years out of WW II and the Korean War had just begun in 1950. Some of the pledges in my year were leaving for the service (one never came back from Korea), and patriotism was causing many of us to ponder our near future. Tubby was slated to be the next Worthy Master and he sat me down and told me he needed my help and would like me to run for Worth Scribe. I told him that I really didn’t like writing and I wasn’t very good at it. Tubby said not to worry, he was a Journalism major and would bail me out, if required. For the next year, despite my continual compliments about Tubby’s writing skills, he never bailed me out and my relief finally had to come by moving on to Rushing Chairman. We lost Tubby last year. “El Supremo” was a good leader and kept me on the right path.

Over the years, have you been able to connect with some of the brothers who were actives with you at Gamma Zeta? Who are they?
My greatest regret in relocating to the West coast 44 years ago was the distance from my Gamma Zeta and Chicago friends. This was impressed on me when my ’54 Gamma Zeta classmate, Waldo Peterson, hosted the ’54’s for our 50th reunion of our initiation in 2001 at his Wisconsin Dell’s compound. Waldo, a past Chapter Advisor and Province Chief, was Pledgemaster for the ’57 Gamma Zetas and has remained an honorary ’57, which allows him to attend the many ’57 Gamma Zeta reunions. Waldo coerced an invitation for Claudette and I to last year’s event in San Diego. What a thrill to be with the Brothers!

Waldo also started a tradition for the ’54 Gamma Zetas. We call each other on our Birthdays. Any ’54’s not receiving their birthday wake-up call should contact Waldo or myself.

Is there anything else you would like to add?
I would like to mention that through recent contact with Dane Luhrsen ’77, I have been reconnected with Bob Simonds ’47, past Worthy Master of three ATO Chapters and past Worthy Grand Chief. Bob, battling ALS, can only communicate via e-mail but remains upbeat and positive about life, family and ATO. I join Bob in feeling very encouraged about the future of Gamma Zeta when younger alums, like Dane and others too numerous to mention, are actively working with the Chapter. These alums, like others over the years, are able to help in many areas and keep the House in a position of prominence. They are active members, they don’t just belong. I know Bob Simonds provides them with the inspiration to continue what makes Gamma Zeta so special. As I mentioned to Bob in a recent email, whenever we have an electronic communication I am left humming our song that ends “Say there’s nothing that I’d rather be than an ATO”!

Reconnect with Ed at edptacek@sbcglobal.net.