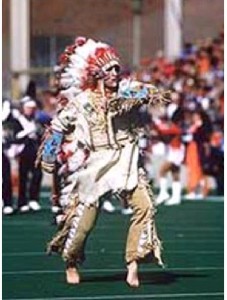 Bill Forsyth, a Gamma Zeta alumnus graduated in 1986, served as Chief Illiniwek from 1984 to 1986. The Chief was banished from the university’s sporting events six years ago. He encourages you to read this article (http://chicago.cbslocal.com/2013/05/07/wisch-return-of-chief-illiniwek-proposed-and-ignored/) which discusses a “common sense compromise” put forth by the Council of Chiefs. If you agree, he suggests that you:

1. Forward it to any and all Illini you know, and;
2. Email the Chancellor (pmwise@illinois.edu) and the Board of Trustees (UIBOT@illinois.edu) voicing support for this “common-sense compromise.”

As the return of the Chief being brought up and ignored, a recent interview with Forsyth was conducted to reveal some of his personal experience serving as the Chief as well as his view on this particular issue. Click here to read the story.

Bill Forsyth, a Gamma Zeta alumnus graduated in 1986, served as Chief Illiniwek from 1984 to 1986. The Chief was banished from the university’s sporting events six years ago. As the return of the Chief being brought up and ignored, a recent interview with Forsyth was conducted to reveal some of his personal experience serving as the Chief as well as his view on this particular issue.

Forsyth’s unique experience started as his sisters strongly encouraged him to try out for the Alternate Chief Illiniwek position. “I grew up going to Illini games and watched the Chief,” Recalled Forsyth. “But I never envisioned myself in the role until I was a freshman and the position opened up.”

After learning the dance through a series of workshops, Forsyth finally became the Chief in 1984 and started making appearance at various university function and countless sporting events, even games overseas. “The Chief performed at all home football and basketball games, as well as all bowl appearances and NCAA tournament basketball games,” Forsyth said. “I was honored to be asked to perform at the 1986 Ricoh Japan Bowl in Yokohama, which was an all-star game played overseas.”

As fascinating and special as the experience to be at all those sporting event, Forsyth’s favorite memories from his time as the Chief may just sound simple. “Some of my favorite memories were the looks on the faces of children and alumni during speaking engagements to schools, Boy Scout troops or alumni events,” Forsyth said. “The Chief truly captured the imagination of the Illini Nation.”

Being the Chief offered Forsyth an opportunity to be in the middle of the packed Memorial Stadium that not many people may even imagine. “It was awe-inspiring to perform in front of 70,000 fans and see them swaying back and forth during the singing of the Alma Mater,” Forsyth said about his unique experience. “The fans served to motivate me.”

In order to maintain the amazing privileges of the Chief, Forsyth had to comply with the traditions to show respect to the role and Native Americans. “The Chief could be removed at any time for unbecoming conduct, so I was very careful not to disrespect the tradition or the role,” Forsyth stated. “The Chief could never speak, nor could the Chief smile.”

As Forsyth’s career as the Chief terminated in 1986, he became aware of objections to the Chief, and he was surprised by any objections given the reverence dignity with which the Chief was portrayed. “The Chief tradition was so respectful and dignified that it was unfair to put it in the same category as, say, Chief Nor-A-Homa, a mascot that I found as offensive as Native Americans did,” Forsyth said.

As a member of a fairly active organization called the “Council of Chiefs” that is organized and operated exclusively for charitable and educational purposes, Forsyth was unable to give out information about the latest proposal from the Council. However, Forsyth did state that they would continue to communicate with the University as well as the Peoria Tribe in Miami, Okla., with the hope of reaching a compromise on a revised tradition.

When asked about his feelings towards those who have strong objections to the Chief, Forsyth’s answer was fair. “I have met with them,” He said. “And I respect their opinions.”

There are a few updates on Forsyth’s current status. He is President of Frontier Partners, Inc., a strategic consultant and business development specialist for institutional investment managers, located in Northbrook, IL. He currently lives in Winnetka with his wife, Martha, as well as his four children, (Will, age 21, senior at Boston College; John, age 20, junior at UIUC; Mary Therese, age 18, freshman at Boston College; and Andrew, age 13, an eighth grader).