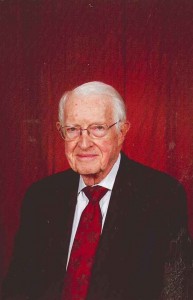 From the moment he first rushed Alpha Tau Omega, the fraternity stood out above all others and Donald Ainsworth ’42 knew it would be the fraternity for him. Now, some seventy years later, Ainsworth reflects fondly on his college years with the fraternity and continues to be involved with the organization as an alumnus.

“Being an ATO has been a tremendous plus in my life,” Ainsworth said. “If I could go back, I wouldn’t want to relive just one moment- I would want to relive all four ATO years.”

While reliving his college years is not a viable option, Ainsworth enjoys being able to stay active within the fraternity organization that he says has done so much for him.

“The best thing about my alumni experience has been the opportunity to stay in touch with many of my Illinois ATO brothers and to meet many ATO’s from other chapters via our monthly luncheons,” Ainsworth said.

The monthly luncheons are held on the third Tuesday of each month at the Greenbriar Hills Country Club in Kirkwood, Missouri. Ainsworth strongly encourages members to take advantage of opportunities such as these.

“I would encourage not only ATO’s, but members of all fraternities to make their fraternity membership a life-long experience,” Ainsworth said.

Ainsworth graduate from Illinois in 1942, after which he served as an FBI agent and a cryptographer for the U.S. Navy. He then graduated from the Washington University Law School and went into the insurance business, where he served as the insurance commissioner for the State of Missouri. In addition, he has served on the Kirkwood, Missouri City Counsel, as president of the Kirkwood Chamber of Commerce and various other boards and committees.