Tom Hicks ’75 happened to be at the Naperville Central Sports Hall of Fame induction ceremony this past weekend (with his wife who coaches XCountry and teaches at Central) and was excited to learn that another Gamma Zeta, Tim Lavery ’99 was one of the honorees.  Tim starred in both football and baseball for the Redhawks.

He gave both sports a shot as an Illini as well starting several games his freshman year at QB for the Illini football team before ultimately settling on baseball.  He went on to play five years in the Chicago Cubs and Pittsburgh Pirates minor league organizations.

As an aside… Tim wasn’t Gamma Zeta’s only multi sport Illini star.

The Illini’s legendary football coach Bob Zupke recruited Harold Pogue ’16 off the Illini track team to ultimately star for the football team and be named All American.  Pogue was considered by many to be the Illini’s greatest football player prior to Red Grange.  He also served a term as Worthy Master of Gamma Zeta.  How’s that for the definition of a busy college student?!?

Burdette “Pirate” Thurlby ’50 played baseball and basketball for the Illini before coaching and playing in the Cubs minor league system.

His classmate Walt “Slip” Kersulis ’50 starred on the football and basketball teams. 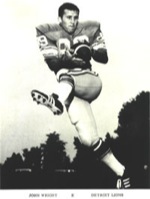 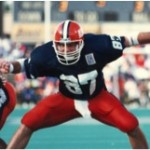 Jeff Finke ’90 played both basketball and football for the Illini.  Jeff’s son, Michael is a freshman on the Illini basketball team.

Tom Hicks ’75, who got this whole thing rolling with his mention of Tim’s HOF selection specialized in football as an Illini before going on to a successful pro career with the Bears.  However, he most certainly could have played multiple sports in college as he was an All-State selection in football, basketball and baseball while attending Willowbrook High School.  He did lead the Taus to four straight intramural basketball championships so I think he deserves a mention!!