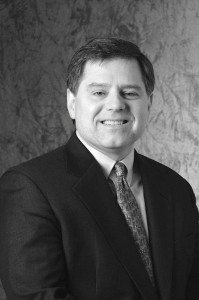 Cary McMillan ’80 grew up in Urbana, so he and his friends from high school naturally had their sights set on attending the University of Illinois. They also had the advantage of participating in rush the spring before his freshman year. Seniors scheduled to enter the University the following fall were given the opportunity to come to campus for a weekend and rush all three stages.

There were dozens of fraternities on campus at the time, but he gravitated toward Alpha Tau Omega.

“The Gamma Zeta Chapter had a lot going for it,” Cary said. “The house itself was the nicest on campus and the older guys were great. They made you feel comfortable right away.”

Cary was able to move into the Gamma Zeta house the first semester of his freshman year. He considered it a great advantage to understand where he was going to live that August and said he was very excited to join the house.

“The house had about 80 guys living in it. In those days there were fewer off campus housing options and people just lived in the house longer. Many of us, including myself, lived in the house all four years,” Cary said. “The atmosphere of the house itself was a very lively and diverse environment. There were guys involved in doing everything – studying, dominating at intramural sports, playing backgammon, playing cards, and going out on the town.”

“Best of all, I had the pleasure of living with some of the funniest guys I’ve ever known in my life. I laughed the entire four years I lived there,” Cary said.

Cary mentioned two brothers in particular, Bruce “Carp” Barry ’77 and Jim “Cavots” Cavoto ’77 as two of the most outrageous among the brothers.

“Carp would do anything to get a laugh. Crazy stunts that would make you cringe like you just don’t do that. But he would do it and it would get a laugh even out of the older guys. He had the fastest sense of humor and could keep you laughing” Cary said.

Keeping the ATO Experience Alive as an Alum

The brothers from Cary’s era have stayed very close and 80% of them attended Homecoming last year.v

“When we got together again it was like we never left,” Cary said. “We spent most of the time laughing, usually at each others’ expense. I’ve remained best of friends with many of them to this day.”

Many of the ATO brothers from Cary’s era stay in ongoing close contact, including Jim Cavoto, Neil Bresnahan ’77, Tom Reisel ’77, Mike Barrett ’77, Dan Touhy ’77, Gary Frantzen ’77, John Aymond ’77 and Barry Booth ’78. At the time of the interview, he was planning a trip to Wisconsin with many of the group that coming weekend.

Learning Things in Gamma Zeta He Could Apply Later in Life

Cary has had a remarkably full and successful professional life which he credits in part to lessons learned in school as a Gamma Zeta brother.

“I think living together under one roof, during that highly stressful and exciting period of life, you form really strong connections. Some of the best relationships of my life were made during my time with ATO,” Cary said, “The ability to build relationships with both co-workers and clients are essential to success in business and your future life.”

“Best of all, I met my future wife, Rande, through ATO. She was sorority pledge sister to Carp’s girlfriend at the time. She was Treasurer of her house and I was Treasurer of Gamma Zeta, so we started getting to know each other.”

In addition to building relationships, Cary said the brothers learned to work as a team towards common goals. He said screening pledges also turned out to be a great way to learn best practices for hiring with an organization.

“I learned to do a lot of things with Gamma Zeta that I could apply in later life,” Cary said. “And I was lucky enough to learn from some very successful guys how to handle certain situations better than I ever would have on my own.”

Cary has been on McDonald’s Corporation Board of Directors since 2003 and is currently a director of American Eagle Outfitters, Inc. He served as a director of Hewitt Associates, Inc. from 2002 through 2010.

Despite his many obligations, Cary still takes time to actively support the chapter. He has been involved in two major fundraisers to renovate the house.

“Some of the best people I have ever met came from the house,” Cary said. “I could not ever pay back the experiences I’ve had with ATO and Gamma Zeta. They are priceless to me.”

Cary has three children and lives in Lincolnshire, Illinois with his wife Rande.