The University of Illinois Fraternity and Sorority Hall of Fame is in it’s second year and is overseen by the Order of Omega leadership honor society for members of Fraternity & Sorority organizations.

It was a nicely done ceremony and included very worthy inductees.  Hopefully, many more Gamma Zetas will join Thomas Arkle Clark in the years to come.

Here’s some information about Thomas Arkle Clark that we submitted on his nomination form. 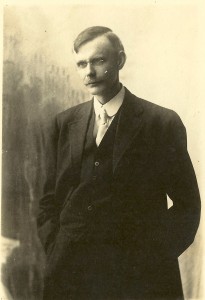 Please list and describe this alumni’s involvement with the community through professional or charitable organizations.

Dean Clark was a prolific author of more than 1400 essays. Among his many publications included are:

As an undergrad, Thomas Arkle Clark was:

We also submitted this pdf of the Daily Illini which includes Thomas Arkle Clark’s obituary and other tributes from shortly after he passed away in 1932.

One of the articles claims that Dean Clark saw an average of 354 students per day during his last months in his job as Dean of Men.  The following are a couple of stories found in the U of I Archives which describe how Dean Clark dealt with a couple of disciplinary situations.  Each was likely a meeting less than one minute long.  However it’s easy to see how each of these were life changing meetings and the vast impact that Dean Clark had on so many people when you consider how many of these that he did.

… Oh I remember the one that made me a 1931 graduate instead of a 1930 graduate. When I got kicked out of school. There was a University no car rule at the University at that time and undergraduates could not drive cars unless they were employed. I got my parents permission to take the family car from LaGrange down to Champaign for a big Spring weekend, dance weekend. So I had this car in violation of their no car rule. And this made travel with my girlfriend from one fraternity to another easier, and go to many different fraternity parties during on weekend. I was driving down Green Street with 3 or 4 people, en route to Chicago, or LaGrange, to return my car and then took the train back to Champaign on Monday.

There was a note in my mailbox from Dean Thomas Arkle Clark asking me to come into his office at 11:30 the next morning. This would strike terror into anyone’s heart. And so I showed up and my interview with him was probably 40 seconds long, and the message was that I was being expelled from the University for the balance of the semester for violating the no car rule. He named the people in the car, what direction I was going down Green Street.

The rumor, of course, around the campus was that Thomas Arkle Clark had a spy ring, and that had never been documented, but I don’t know that it had ever been completely denied either. In any event, Thomas Arkle Clark was a feared dean. I had tremendous respect for him, but that was the rule and regulation that I do remember.

And my father, I will give him credit when I told him what had happened. I had lied to my parents really. I told them that there would be no problem, that this was just for a weekend. He never berated me in anyway, but he did say, “Despite your actions, I will give you a graduation present, and that will be another semester in school so you can get your degree, because it is essential if you want to be a success that you get that degree.” I remember clearly, he said, “Bill, you go back to school.” No I didn’t want to go back. I said, “Dad I don’t need a degree. I am a college man now. I don’t need anything more.” And he said to me, “You go back and get that degree or you will regret it the rest of your life because you will always have to explain why you didn’t complete your schooling!” So I did go back for the following semester. Of course, in retrospect it was great advice, but he never turned me over his knee and thrashed me or anything [laughter].

This second story was also told in 2001 and concerns Red Grange (likely just before he had his famous game against Michigan dedicating Memorial Stadium).

There was another football player named Swede, and Swede was a great friend of Red Grange, and he had a car. Forbidden, but he had a car. And so this particular night they had gone down to the Orpheum Theater that had Vaudeville shows and they had a gallon of Prohibition whiskey in the car. When they went into the performance the manager saw him and said, “Oh say, we sure got a good troup here this time and they’re staying over at the hotel.” There was a hotel right across the street at the time, from the Orphium. “They’re staying over there after the performance, we’re going to have a little party.”

Now, this was on a Saturday night. Dean Clark had a spy system, he had a kid in every fraternity and in every rooming house who reported to him any unusual things. So Monday morning Mr. Grange was called into Dean Clark’s office. He said, “Mr. Grange, I understand that on Friday night you and Sweed went down to the Orpheum Theater and attended a performance there and afterwards you went out to the car and got this gallon of whiskey and you took it over to the hotel across the street and you participated in this party. Is that correct Mr. Grange?” He said, “No, Friday night I was in Danville, I can prove it.” Dean Clark said, “Mr. Grange, if you say so, that’s fine.” He said, “it took me a good many years to realize that he had changed the night.” He knew. The reporters said, “Can we print that story?” And he said, “no.””