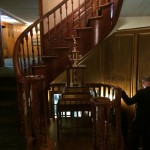 From 2000 through 2009 Gamma Zeta Alumni gathered in August each year for a golf tournament to remember Matt Heldman ’98, a former Gamma Zeta and Illini basketball star who tragically died in an automobile accident.  The tournament raised thousands of dollars for the Matt Heldman scholarship fund which is awarded each year to deserving ATO undergrads.

A huge trophy was commissioned and displayed in the chapter house to recognize the winners of the tournament each year.  Unfortunately, over the last few years, the trophy had fallen into disrepair and was nearly thrown out.  The good news is thanks to a generous donation from Dave Krug ’95, the trophy has been saved, restored and is back in it’s rightful place at the base of the stairs in our front entryway.

However, we’re missing the names of the winners of the tournament from several years.  Here is a list of those that we have and are missing:

If you can help fill in the blanks for those years that we are missing, please send me an email at daneluhrsen@gmail.com.  I will get a plate made and mounted on the trophy.

And… watch this space!!!  We have some ideas for reinvigorating the Heldman trophy competition that we should be able to announce soon.  Should be lots of fun.