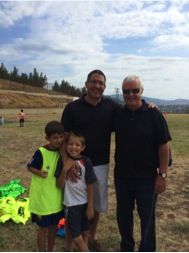 Note… Larry Austermiller ’61 noticed in a Gamma Zeta News item that Dan Blaho ’90 was working and teaching in Tbilisi, Georgia (that’s the country of Georgia… think Black Sea, not Lake Lanier). Coincidentally, Larry’s son and family are working there as well. So, when Larry took a visit to his family this August/September, he decided to look up his ATO Gamma Zeta brother on the other side of the world. Here’s Larry’s report…

Had not had a chance to connect with Dan Blaho here in Tbilisi, Georgia due to our mutual schedule issues. Learned this A.M. our grand daughter was going to a soccer practice at school where Dan is the new “Director”. Picked out from crowd who I assumed was Dan and approached him with a “Ruh Ra Rega” and received an “Alpha Tau Omega” reply so knew I had ID’d the right guy!

Despite our nearly 30-year difference, we had a great conversation comparing various ATO connections/experiences. Introduced Dan and his lovely wife and 3 boys to my daughter in law. A great net working opportunity (personally….our son/daughter in law are very involved in expatriate community here and will “bring in” Dan’s family) and professional ( Dan very interested in a joint extra curricular program between the 2 schools our daughter in law brought to his attention) so I am very happy we all met. See attached pic that might be an interesting item for Gamma Zeta newsletter demonstrating a small world situation and a “ties that bind” mentality despite age/time differences?

It is clear that Dad is doing a great job with his school (QSI) and has made a positive mark in just his first 6-7 weeks on the job!   Another testimony to whatever intangible benefit we all took away from our Gamma Zeta experiences……some of which are best left undocumented…….but all part of the “education” we received while at 1101.

This is a bit long winded, but my way of saying thank you for your attention to detail and connecting the Tbilisi “Dots” that made this happen.