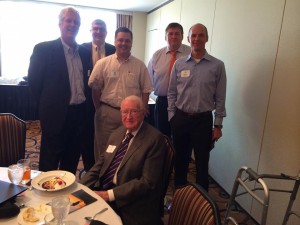 Don received a Bachelor of Science degree in marketing from the University of Illinois though he claims that his actually majored in Intramurals and is very proud to have finished in the top three in the individual intramural all-points competition. After graduation, he became an FBI Agent. He left the FBI in 1944 to enlist in the U.S. Navy and served as a cryptographer in Hawaii and Guam where he participated in a group of ATO servicemen from around the country.

After the service, Don attended and graduated from the Washington University School of Law in 1948 where he was elected student body president and served as chairman of the Ethics Committee. Don then began a long and illustrious career in the insurance business ultimately retiring from the Safety National Casualty Corporation where he served as Executive VP. He also served as Insurance Commissioner for the State of Missouri.

Don has been and continues to be active, loyal and a generous supporter of ATO and Gamma Zeta. He’s been a long member and one of the founders of the St. Louis ATO Alumni association. Just this past spring, he made a significant donation to the Gamma Zeta Piano restoration fund. For years, Don made donations to support the Gamma Zeta Intramural program. THANKS!! Don for your 75 years of membership and service to ATO.