When someone reaches the pinnacle of their profession it’s certainly worth noting and one of our own, Mike Stine ’84 did that this past weekend. Mike is the Head Varsity Football Coach at Naperville Central High School and his team won the Illinois State 8A Football Championship on Saturday. The Redhawks had an incredible year fighting through the DuPage Valley Conference, arguably the toughest in the state, and then proceeding to win four straight in the playoffs against the best teams in Illinois to win the prestigious 8A crown (largest school class in Illinois).

Mike, you were part of great Illini team that won the Big Ten Championship and went to the Rose Bowl in 1984 and now an Illinois State Championship team. Which experience was most exciting? What is it about high school football that makes it so special?

The State championship was very special. A group of special guys put so much time and work into something together, it was great seeing them rewarded for that. It was also special to me personally because I was able to share the experience with my parents and my son. The Big Ten Championship was also very special. I think it was so long ago I have forgotten some of that experience. I believe so many life lessons can be taught and learned thru the game of football.

The key play in your Championship game against Loyola had to have been the blocked field goal that was returned for a touchdown. Did you call anything special for that play? Was the fact that you could even advance a blocked field goal something that you had practiced or talked about during the season?

It was a huge play. It was something we work on all the time in practice. Dillon had blocked 3-4 punts in his career, this was his first FG. He had been close many times all season.

What are some of your most vivid memories from this past weekend… the preparation, the game and the post-game celebrations?

We actually prepared the same way as we did week one. We are very big on routine, so we did not change anything. The whole day was an amazing experience. NIU did a great job of hosting the games. Seeing the guys in the locker room before the game and the look in their eyes was very special. The celebration on the sideline with the players and coaches was a moment we all will remember for a long time. When we got back to Naperville we had a police escort to the school and the gym was full of parents and students. It was a crazy celebration at 12:30 am. We are very blessed to have such great support at Naperville Central.

You had an incredible roller coaster of a year starting out 5-0, losing three straight in the DVC and then going on the five game streak at the end to win it all. How did you keep the boys together and believing that they could still win it all when they lost those three games?

The coaches and players know we play a very difficult schedule. The only way we want it. We know if we make it into the play-offs we will be prepared to make a run and win it all. 2 years ago we were 6-3 and made a run to the semis. Last year we missed the play-offs going 4-5. Then this year we got in at 6-3 and made a run to win it all. There is a lot of trust between the players and the coaches. Our motto this year was 1-0. We looked at each week individually and we worked to go 1-0 each week. We had great senior leadership that really helped all season.

Winning a state championship is really a very rare and difficult thing to do, especially coming from the DVC where every week is a battle that threatens your chances of even making the playoffs. What do you think are the key factors to your program’s success? What did you do differently that set Naperville Central apart from the rest of the field? 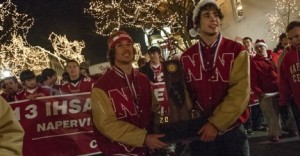 This group of seniors dedicated themselves and worked 1 year and 5 weeks to earn the right to play in the state championship. These guys were at school almost every day at 6 am working out together. The relationships they built were so strong and deep, they truly played every play in practice or a game for one another. We had great players, that is what wins championships…

I remember reading an article when you originally were named the Naperville Central Head Coach that said it was a “Dream Job” for you. Did you always want to be a high school football coach? How did you end up at Naperville and ultimately in the Head Coach position?

My father was a head football coach for 37 years. I knew at a very young age that’s all I wanted to do was be a high school coach. I was very blessed to end up in Naperville. I student taught at Naperville North and was able to get a job at Central the next year. I was an assistant coach for 21 years before I finally had the opportunity to be a head coach. I’m very lucky to have my dad on the sideline with me. I’m also very fortunate to have 25 outstanding assistant coaches in the whole program. We have about 220 total players also in the program. We have wonderful community and parent support.

I’ve read about some of the non-football things you do with your boys such as the special program for their mothers. Can you tell us a little about those things and the impact that it has on the boys and your program’s overall success.

We are very big on FAMILY with the football program. We do a Mother Son brunch and dedicate the first week to the LOVE relationship between the Mother and Son. Week 2 is about the Father Son relationship. We do an Education appreciation game. We do a Black out for Easter Seals game. We bring speakers in every Thursday to talk to the team about Life lessons. Life lessons and building relationships that will last a life time are what high school sports should be measured on. Too often all we measure is wins and losses. That’s wrong. With that measuring tool, 50% of all teams fail every week. If we measure on Life lessons and relationships we can have 100% win every week.

Back to your college days… what did you learn from those Illini Bowl teams that you were on that translated to your high school coaching?

I think the biggest thing was working with and being around so many different personalities. How different people can still come together and work for and achieve a common goal. Again I believe it comes back to building relationships.

Tell us a little about your experience with ATO. You must have been very busy with the Illini football team but were you able to have some good experiences with ATO? What are some of your favorite memories of your time at 1101? Who were some of the most memorable guys and do you stay in touch with any of them?

There are so many great experiences. The ones that jump to mind are Naps up dancing on the speakers to Grease lightning. I remember making many early morning breakfasts (I was the kitchen manager for a few years) for Limo as he was usually just coming in from a long night. Our Walk out to SMU with all the guys (Gary Carter driving with goggles on) was an amazing few days. Tom Auld is also a teacher now in Naperville. He is on the sideline of many of our games and was there during the championship game.

Can you tell us a little about your family and what you do for fun outside of football? 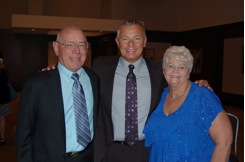 There really isn’t much outside of Football. It is a 24/7 job. I’m also the head Girls track coach here at Naperville Central. I spend a lot of hours here at Central. But I love it. I have a 22 year old son, Adam. While in HS he was one of the top wrestlers in Illinois. He will be graduating next week from the University of Missouri. I have a brother, Mark, who also as an ATO. He lives in the Dallas area and is an athletic trainer. I’m blessed to still have my parents at every game. They live full time in their motor home and travel the US.

What’s next for you? Could we talk you into taking Beckman’s job??

I hope to be able to finish my career here at Central. I really believe this is one of the best jobs in the entire state/country. Next year’s team has already started their own journey. It is going to be great riding along with them and see where they end up.