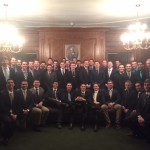 Here are some comments from alumni who attended the ceremony…

… it was very well done.

Jimmy and his team executed the ceremony with a professional attitude, demonstrated the importance of doing it well, moved through the various protocols respectfully, and did it with the meaning it deserved.

Any of the BOT would have been very pleased to see how the traditions are executed and valued.

I would second Stormin’s view. The Officers were “all in”.

As being the oldest one there, I got to read two small “distinguished alum” parts. I was pleasantly surprised by how the ceremony brought back a lot of my memories for me of the event from my initiation and one I attended at a reunion of the late 40s and early 50s classes at which we re-oathe’d them. Not a dry eye in the bunch.

I spoke briefly at the end about a stick pin I was wearing from Gamma Zeta Harold Pogue (the Red Grange of his day) that he got when he went to the Semi-Centennial of ATO in Nashville in 1915 as young men similarly situated to this new class of ATOs were preparing to go off to WWI. I mentioned how as they returned from that war and became known as the “Fighting Illini”, Pogue was huge in the promoting and fund raising for Memorial Stadium.

Stormin addressed the Class too and hit on four points that he felt were inherent in all of their reasons and purpose for being at the Big U, most importantly their faith. It was all done and over with in less than an hour. Short, sweet, and well done by Jimmy and his officers.