Chick Doster led Decatur to the 1945 Illinois State Basketball Championship. He was the tournament’s leading scorer with 96 points in four games, including 18 in a 62-54 victory over Champaign for the title. He went on to star for the Illini where he finished third in the Big 10 in scoring his freshman season blocked George Mikan during a 56-37 upset of top-ranked DePaul.

Bill Erickson led Rockford East High School to the final 16 of the state basketball tournament as a junior, and then a fourth place finish as a senior. 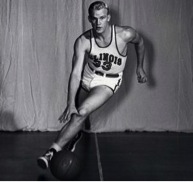 As an Illini, Bill played in every single game during his four-year career and was a starter for the final three. In his junior season of 1948–49, the Fighting Illini won the Big Ten Conference title and advanced to the NCAA Tournament where the Illini finished third. Erickson was named to the All-Big Ten team and was dubbed a consensus Second Team All-American.