Gamma Zeta alumni have created seven scholarships with an endowment of over $500,000 awarding nearly $20,000 per year to Gamma Zeta undergraduates.  Criteria include academics, community service and leadership.  We have an outstanding scholarship committee which includes:

Twenty very qualified candidates applied for the scholarships this year and seven scholarships were awarded on October 25 at Homecoming in a ceremony Saturday morning.

Frederick C. Philbrick Memorial Scholarship – Frederick C. Philbrick was initiated
into Gamma Zeta in 1911 and he appears in the chapter roster in the Illio yearbook
that year. However, he doesn’t appear in the yearbook in any subsequent year.
That must have been one great year. Sixty years later, in 1975, William Krahling, 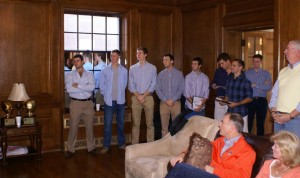 the Interim Executive Director of ATO National at the 9me, got a letter from Fred’s
niece. The leTer explained that Fred had passed away in 1972 and his wife had
died in 1974. They had lee a significant bequest to the ATO Founda9on to be used
for scholarships for Gamma Zeta undergrads. This gie now represents an
endowment of over $70,000. This year’s winners are RJ Kleinhans – 3.13 – Engineering
and Alex Schwartz – 3.12 – Accounting

Robert J. Simonds Memorial Scholarship – Bob Simonds was a Gamma Zeta ’46.
He has the unique distinction of being Worthy Master of three different ATO
Chapters, Illinois, Ohio Wesleyan and Penn. He is also one of four Gamma Zetas
who served as Worthy Grand Chief of ATO National. Though Bob was stricken with
ALS and late last year he passed away, last fall he served as Family Chair for the
ALS Walk4Life in Chicago. His team has raised over $60,000 for ALS research with
significant support from Gamma Zeta undergrads who raised over $11,000 and
Gamma Zeta alumni who raised over $12,000. This year’s winner – Mitchel Talbot – 3.54 – Business

David S. Timson Memorial Scholarship – Dave was a Gamma Zeta ’75. Dave
pursued a career in the investment finance field, serving a variety of financial and
planning posi9ons including director of Venture Management and analysis for
Greyhound Capital Corpora9on, execu9ve director/partner in the Private Markets
Group of Brinson Partners, Inc. and Greeley & Hansen. He was responsible for the
Birds Eye, Esselte, Hertz, Kappa Smufit and Leiner investments. David was
instrumental in inves9ng in companies such as Microchip Technology, Morningstar
Foods, SalesLogic and Scientific Protein Labs to mention a few. This year’s winners are Brett Freedberg – 3.68 – Finance, William Hanson – 3.67 – Business and Jack McAndrew – 3.38 – Finance