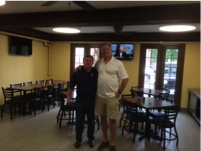 Last weekend Neil Bresnahan’80 and I attended some basketball and football festivities. In between we stopped by Gamma Zeta and met Worth Master, Jimmy K …

The last time I had been in the House it was a disaster. Well Neil and I were shocked how great it looked on Saturday am. The Living rooms have returned to greatness… The lower level study rooms have been expanded and the Chapter Room was awesome.

I was stunned at how functional the dining rooms have become. Filled with practical furniture ..clean and neat. And the New dining room was rebuilt; gone were the old windows and doors. Replaced with a more functional and efficient wall, window and door. Really great. 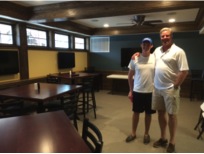 And Jimmy told us of all the process improvements made to the pledgeship. The end of hazing. The return of respect for the brothers and the house itself.

I go to every football game and will be stopping by every time now. You should too.

Finally I can’t thank the guys who worked and continue to work on the turnaround of Gamma Zeta. Thanks so much !

As a former House Corp President, I would be proud to donate to Gamma Zeta if asked again…

By the way, Neil and I stopped by Pikes to drop off a ticket …. Despite being new, the house was a PIT! 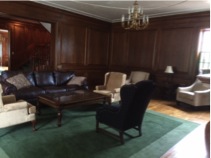 Well done. Let’s shake off the noise from the ” penalties”, which sound minor to me.

See you in Champaign.

Note… special thanks to Jeff Piper ’00 and Jeff Eversden ’05 for the vision to get this project off the ground, Dave Krug ’95 and Greg Scott ’76 for stepping in and driving it to completion, Art Hasse ’61 for donating the new furniture for the Study Room, Nobel Olsen ’77 for leading the fund raising effort and all of the ‘77s who contributed over $400,000 to make this happen.