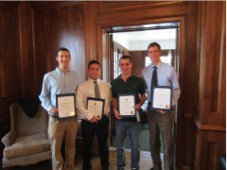 Our Gamma Zeta undergrads went into the Fall semester determined to make a significant improvement in academic performance. They set a goal to finish above fraternity and university men’s averages and combined with alumni support put several programs in place to help. Their hard work and planning paid off as the chapter jumped an incredible 20 spots in the University of Illinois Fraternity GPA Rankings.

Going back to last spring, leadership recognized that changes needed to be made. Higher goals were set for the chapter as a whole and for each individual member. Chapter Advisor, Jim Dobrovolny ’70 suggested and implemented a program where each member set and publicly committed to individual improvement goals. Alumni mentors were assigned to each active and pledge and they led one on one discussions about the importance of academic performance, particularly as it relates to the improved availability of internships and job interviews based upon better GPAs. Alumni Board of Trustees Chairman Jack Klues ’77 worked closely with undergrad scholarship chair Jack Vadaboncour on an innovative program called Tau Rewards, which allowed for peer driven recognition for actions which supported academic improvement. Dave Seiler ’77 led an alumni committee, which publicly awarded over $20,000 in scholarships at homecoming to deserving undergrads. But mostly, the guys just buckled down and did the work needed to achieve the improvement.

Here are the highlights:

These individuals were all treated to a steak dinner paid for by alumni in recognition of their outstanding performances.