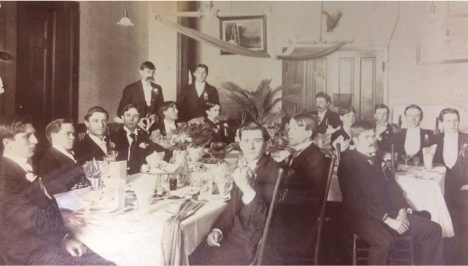 Some of the first suggestions to form a chapter of Alpha Tau Omega at the University of Illinois came in the winter of 1892-3 at the dinner table at the home of Wesley E. King, 405 West White Street, Champaign. Seated around the table were, John H. Strawn, Clarence O. Pitney, Mark Hay, Henry W. Grieme, and Wesley E. King. The conversation turned to Greek letter fraternities. Mark Hay said that he had a pal in Chicago who could get a chapter of Alpha Tau Omega, so he was told to write to him and get instructions for organizing, which he did. This friend wrote Mark to organize as a local club and apply for a charter, but no formal organization was ever made. The matter was discussed later in Henry Grieme’s room at the home of Mrs. Elizabeth Trotter, corner of Elm and White streets, Champaign, in the Spring of 1893. Nothing definite was accomplished, however, until about a year later, when the matter was taken up with Brothers W. G. Atwood, of Beta Theta Chapter, by Charles W. Noble and Mark Hay. END_OF_DOCUMENT_TOKEN_TO_BE_REPLACED 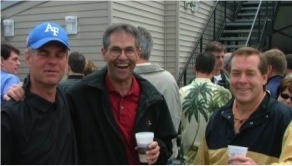 “It was the fall of 1974 and we were sitting for dinner at our table of six in the ATO dining room. The custom at the time was for seniors to sit at each end of the table and the underclassmen to sit at the sides. DLux (Doug Laux ’75) was sitting at the head of the table and I was at the foot. I can’t remember who were at the sides this particular night but we would have likely had a couple of juniors, a sophomore and at least one Phrogue. Things were relatively slow that week.

We didn’t have an exchange planned. END_OF_DOCUMENT_TOKEN_TO_BE_REPLACED

In 5 intramural divisions… Point trophies awarded Five new Intramural Achievement Point Trophy winners have been crowned, one in each of the five divisions. The trophy, symbol of athletic supremacy, is awarded on the basis of most points earned throughout the year in ten intramural sports. With a second place finish in 16 inch softball, Townsend 4S gained enough points to overtake Weston 3W and capture the Achievement Point Trophy in Men’s Residence Halls division with a total of 344. Weston 3S finished second with 329 points followed by Scott 2W (299) and Snyder 2W (220). Townsend earned a large portion of its points on the strength of championships in volleyball and water polo. In the Fraternity Blue division, Phi Epsilon Pi edged out last year’s point trophy winner, Alpha Tau Omega by a quarter of a point, 321.25 to 321…

“The year after helping Phi Epsilon Pi beat ATO out for the All Points Trophy, Vie and I joined ATO. END_OF_DOCUMENT_TOKEN_TO_BE_REPLACED 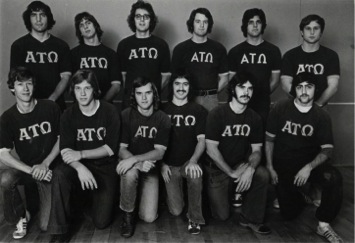