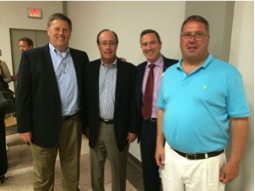 BB graduated from Taylorville High School in 1973. He was a three sport star who was an All Mid-State Conference quarterback in 1972, team MVP on the Tornadoes ‘ basketball team and shortstop for the baseball team in 1973. However, he was inducted into the Hall of Fame as a “Friend of Sports” for his generous support of Taylorville athletics for many years as a contributor to the Tornado Open Golf Outing and many other Taylorville area philanthropies. Gamma Zetas Dane Luhrsen ’77, Bill “Buckets” Ganey ’75 and Bruce “Carp” Barry were in Taylorville to help BB celebrate his induction. Another of BB’s brothers, Dan “Dog” Barry ’84 is also a Gamma Zeta.

As an Illini, BB continued his athletic prowess leading Gamma Zeta intramural teams to many championships in football, basketball and softball. He also graduated with Highest Honors and was awarded the Bronze Tablet for graduating in the top 5% of his Illini class.

BB continues to serve Gamma Zeta on the Board of Trustees as VP of Development.