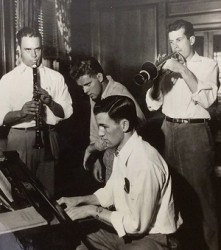 We’ve all walked by the piano in the Daniels Room (west living room) of the Thomas Arkle Clark Chapter House hundreds of times and probably didn’t think much of it. In recent years, however, it has, fallen into serious disrepair. Drew O’Neil ’14, last year’s Worthy Master, mentioned to me that he was an avid piano player as a kid, would like to play again, and asked if we could get it restored. That simple question caused me to wonder about the origin of our piano. When did we get it? Where did it come from? Is it valuable? Is it historically significant? Should we restore it and if so, how much will it cost?

We started the search by asking around to some of our oldest living alumni, Ed Giller, Rex Sherman and Don Ainsworth, all who initiated in either 1938 or 1939. They remembered the piano but had no idea about its history. Bob Simonds ’43 responded to the question as follows, “I well remember the grand piano in the Gamma Zeta chapter house. I mainly recall its being played — very well — by the late Gordon (“Swede”) Anderson, GZ ’46. Every morning he would play. He always had a smile on his face, and his ivory-tickling helped us start the day. I also remember the piano’s role in song practice (yes!) at 10:30 p.m. on Wednesday nights when the late Franklyn (“Woody”) Meyer, GZ ’41 Song Director, would tune us up to compete in Sachem Sing, the annual campus-wide event for men’s groups.”… but Bob didn’t know anything about the piano prior to his time in the house.

We were able to find the brand, Bechstein, and serial number. The manufacturer’s website indicated that our piano was built in Germany in 1902. We also learned that Bechstein is a highly respected maker of very high quality, expensive pianos. In the 1880’s, Bechstein provided pianos to Queen Victoria at Buckingham Palace and Bechstein’s were common in palaces across Europe in the early 1900’s. In more recent times, Freddie Mercury, The Beatles, Bob Dylan and Billy Joel have all recorded hit songs using Bechstein pianos.

Local piano expert, Steve Schmidt, owner of the Piano People in Champaign came by and took a look. He informed us that a new Bechstein piano of similar quality to ours would cost over $100,000 and our piano fully restored would be worth up to $40,000. A full restoration would cost about $25,000. We had this validated by Robert T. Fürst, author of the Bluebook of Pianos, who provided a conservative restored value estimate of about $29,000.

So, the questions of age, quality and value were answered but we still didn’t know our specific piano’s history. This inspired a trip to the University of Illinois Archives and a search through old Gamma Zeta Newsletters. This proved fruitful and nearly all of the rest of the questions were answered with various mentions in the Gamma Zeta.

January 15, 1916 Gamma Zeta News. It mentions that a decision to buy a new grand piano had been made and budget approved but it had not yet been purchased. Interestingly, the chapter indicates that they used the fact that it would be good advertising for the piano dealer to have their piano in Thomas Arkle Clark’s fraternity. Just a couple of year’s later, the chapter was forced to move out of the house at 405 E. John due to the military’s need for housing during WWI. In the November 9, 1918 Gamma Zeta, an article titled “The A.T.O. Annex – a war measure” says “Brother T. A. Clark was kind enough to let us place our new piano in his home.” This clearly places the Gamma Zeta acquisition at some time between January 1916 and November 1918, our ownership now spanning nearly 98 years. When the Chapter moved into our current home at 1101 W. Pennsylvania Avenue, a May 1931 Gamma Zeta says “In the music room, the Bechstein piano, one of the most prized possessions of the chapter, stands out.” Twelve years later, on Jun 9, 1943, a complete inventory of the house was taken when the chapter had to vacate the house again, this time due to WWII. The Clark Room inventory included “One Bechstein Piano and Bench.”

To sum it up, we are in possession of a rare and valuable 112-year-old instrument that Gamma Zeta ATO has owned for 98 years. It has survived two World Wars and over 2,000 18-22 year old young men. Clearly, this is a piece of history we think is worth saving and restoring.

Along those lines, we’ve already received a donation of $7,500 to go towards the restoration and renovation. This is enough to get the work started. We just need to come up with another $17,500 to complete the job before next fall. If you are interested in in helping out, send a check made payable to the “ATO House Corporation” and mail it to: Dane Luhrsen, 1944 Hampton Drive, Wheaton, IL 60189.