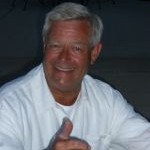 Marc Burnham Fagot, 55, of Geneva passed away peacefully at his home on Thursday, March 5, after a valiant, year long battle with cancer. By his side were Robin, his loving wife of 28 years, and his two sons, John and Drew. With him in spirit and support at his passing were countless friends and family members, all of whom were blessed by having been a part of his life.

Marc was born May 10, 1953 in Danville, Illinois, the son of Robert and Mertyce Fagot. He graduated from Danville High School, where he was active in the choral music programs, as well as swimming, track and, most importantly, football. He was chosen to attend the American Legion Premier Boys State conference in Springfield, where he was elected Boys State Attorney General. Marc then attended the University of Illinois in Urbana-Champaign. While at the U of I he was a member of Alpha Tau Omega Fraternity, and a fullback for two years for the varsity football team. He graduated in 1975 with a Bachelor’s degree in Business Administration.

After a brief association with Mark Shale and Associates in Texas, Marc moved to Chicago. He opened Marc Marketing in a showroom at the Chicago Merchandise Mart, and remained at the Mart for the next twenty years. As the business focused on unique home furnishings and decorative accessories, Marc was elected President of the Chicago Gift Association. He moved the business to Geneva in 2001, also operating a retail store “Domus” on Third Street. Most recently, Marc was employed as a sales manager for Riverfront Chrysler Jeep in North Aurora.

Marc and Robin (Unverferth) were married in Danville on April 12, 1980, and after living in Chicago for a short time, made their home in Geneva. Along with being a tremendous ambassador for the community, Marc served as a charter Board Member of the Geneva Baseball Association, and was responsible for the initial fundraising efforts necessary to get the league started. In addition, he served as the Treasurer of the Geneva High School All-Sports Boosters. It was 9 years ago that Marc found the perfect opportunity to demonstrate his caring and commitment to the youth of Geneva. In 2000 he stepped forward to volunteer as an Assistant Coach for the Geneva High School Football Vikings. In that capacity, Marc not only helped shape young lives, but also helped to rebuild the program and lead the Vikings to the state championship game this past November.

Marc was an avid fisherman and took many father/son fishing trips to Canada with his sons. He also enjoyed golf, loved the Cubs, the Bears and, most of all, his Fighting Illini.

Marc is survived by the love of his life, Robin, and his two sons, John and Drew, all at home in Geneva. He also leaves behind his parents, Mertyce and the Hon. John P. Meyer of Danville, his brothers Robert (Kathy) Fagot of Egan, MN, John (Toni) Meyer, Jr. of Danville, Michael Meyer of Yorba Linda, CA, Christopher (Sue) Meyer of Danville, his sisters Mary (Rudy) Manfredi of Fairfield, CA, Betsy (Russell) Elam of Susanville, CA, Melinda (David) Jankowski of Danville, a special brother-in-law, T.J. Goetting of Bangor, ME, as well as many nieces and nephews.

He was preceded in death by his father, Robert and his beloved sister, Tamara.