Just yesterday, Internet culture website, the Daily Dot, acknowledged Gamma Zeta Undergraduate Jon Osacky for creating the Android, and soon to be I-phone application, Meter for Uber. Meter for Uber gives Uber users a breakdown of exactly what they are paying for when they decide to ride with Uber.

Osacky came up with the idea while he was interning in California for another phone application company called Slice. Since he did not have a car, Osacky depended on Uber to get him from place to place and became interested in how Uber calculates its final cost. From here, Osacky began working and developing what would eventually become Meter for Uber.

Currently, Osacky is back in California interning for Facebook and will remain there over summer for an internship with Uber. 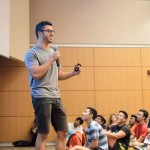 Jon speaking to an audience for ACM Open House at U of I.

Congrats Jon on all your achievements, and I’m sure there will be many more to come!